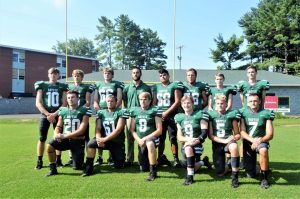 It’s football time on Battle Hill. After another season culminating with a trip to the post-season, the Trojans will enter 2019 trying to make it four in a row; this time under new head coach Bradley Ricker. Previous head coach Brit Stone led the Trojans to three straight playoff appearances. Coach Ricker has no intention of changing things.

“Brit did a great job here at John Battle. He accomplished things that have never been done at this school before. We want to keep things that were put in place here. Same intensity, same work ethic, same atmosphere, and the same purpose of continuing to grow like we always do. I have given this team some very high expectations because I feel like we can do a lot — like we always do.”

Coach Ricker is no stranger to John Battle Football. He graduated from Battle in 2006 and, after attending college at UVA Wise, he returned as an assistant coach, where he remained for seven years — under three different head coaches.

“The leadership coming back is very important. We are experienced, We are veterans, We know what we are doing so a lot of things come down to repetition in practice trying to get perfect execution. We are still going to be blue-collar. We are going to be physical and get after it everyday. We also have good relationships with the players and we all have a great work ethic.”

“In a run heavy district I feel it starts with the players in the box.” said McCloud. “We have to get in the backfield and stop the run. We also have to plug holes so our linebackers can make plays. Our leadership coming back helps make sure the younger guys know the responsibilities of playing football and knowing we will help them learn any position the right way just as we were taught by the guys ahead of us.”

Senior outside linebacker Bryson Denton has started on this Trojans defense for three years and two of the three playoff games. He agrees with McCloud about their defense.

“We hold our defense to a very high standard. We all have our own responsibilities. Our coaches play a huge roll in our performance and how we stay focused. We have an all for one for mentality because of our relationship with our coaches. Watching my coaches have the same work ethic as us watching them grind with us makes me want to leave everything I have on the field every play practice and games. I have a lot of responsibilities at my outside linebacker position. I could be blitzing, pass protection, and of course tackling any body with the ball, I take what I do seriously as well as the rest of the guys and we all have each other’s backs. I love every part of my job on this team.”

Offensively the Trojans have just as many returning starters. With a full returning group of backs, receivers, and an experienced offensive line, the Trojans should field a potent offense. Still Coach Ricker wants his experienced team to focus on the basics.

“Every game we are in, we are going to focus on us. One play at a time, high intensity, making sure we all have the right assignments. Every play in every game our main focus will be on us.”

Leading the team in the huddle is returning starter Walker Osborne. He believes thoroughly in what Coach Ricker is teaching.

“ We have a great group around me. Hardworking, tough guys  that don’t give up. Guys like Zane Poe at wingback that is tough and quick and makes hard situations easy to get out of. Guys like Dylan Cunningham who has your back will hold his blocks. You can count on his hard running and quick cuts to keep us moving down the field. Guys like my offensive line who will stand in and fight in the trenches till the last play. I trust all these guys. Our team expectations is excellence. To make our school, Our fans, and the teams and coaches before us proud.”

Yes the shoes are big, but Coach Ricker and his Trojans seem more than capable of handling the job. All of them are ready for football on Battle Hill.

The Trojans open up with the Abingdon Falcons Friday August 30 at 7:00pm in Abingdon. The game will also be broadcast live on the John Battle Radio Network.