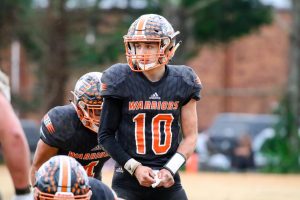 Riverheads: The back-to-back Class 1 state champions look to perform the trifecta on Saturday afternoon. The seniors on this year’s version of the Gladiators have been to the state championship in each season they have played varsity football. As freshmen, the Gladiators fell to Mark Dixon and the Galax Maroon Tide 7-6. The next season, Riverheads throttled Sussex Central in route to a 49-6 state title victory. In 2017, the Gladiators stomped on the gas against Chilhowie to win their second consecutive state title with a 42-0 blanking of the Warriors. Robert Casto leads the Gladiators in his 23rdseason at the helm in Greenville. Casto has compiled a 221-59 record at Riverheads while claiming state titles in 2000, 2006, 2010, 2016 and 2017. It is no secret what Riverheads hopes to do with the football. The Gladiators will try and ram it down the belly of the opposing defense on the ground. The rushing effort has been successful thus far. Zac Smiley has rushed for 1,575 yards and 30 touchdowns this season. Jaden Phillips amassed 803 yards on the ground while racking up 12 touchdowns. Devin Morris gained 746 yards heading into the state championship game while making 14 house calls. Riverheads has won their last 10 contests. The lone slip up for the Gladiators was a 28-0 thrashing at the hands of East Rockingham in September. Casto’s team has averaged 46.2 points per game in 2018. The Red Curtain defense has allowed 10.8 points a contest. Riverheads looks to have the same success it did in 2017 when it held Chilhowie to 99 total yards while keeping them off the board. If Riverheads wants to win against a much-improved Warriors team, the Gladiators must rinse and repeat what they did less than a year ago. 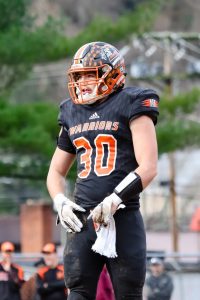 Chilhowie: The Unfinished Business tour for Chilhowie rolls into Salem with hopes of making history. For the third time in school history, the Chilhowie Warriors are playing for a state championship. The Warriors have exerted pure dominance while averaging 46.5 points each time they have stepped on the gridiron. Logan Branson and the Chilhowie defense have only allowed a mere 6.6 points an outing to its opposition. In his sixth season at the helm of the Chilhowie program, Jeff Robinson has guided the Warriors to 14 wins—a program best. 2018 saw Chilhowie post its first 10-0 regular season since 1971. Quarterback Zack Cale has thrown for 1,240 yards this season while churning out 768 on the ground. Greg Sanchez needs 64 yards Saturday to eclipse the 2,000-yard rushing mark. The senior tailback has gained 1,944 yards through 14 contests while scoring 29 touchdowns. Today, Sanchez will don the No. 22 jersey in honor of the Chilhowie legend, the late Will Walker. Logan Branson set the school record for tackles for loss in a season. Robinson has noted numerous times that Branson is the leader of the Chilhowie defense. The Warriors seek to avenge a 42-0 loss to Riverheads in the state championship on the same field in which the two met up 363 days ago. The Warriors prolific offense also looks to improve on 2017’s contest with the Gladiators in which Chilhowie amassed 99 total yards. Chilhowie has an advantage when it comes to experience. The Smyth County squad fields 15 seniors, however, the Warriors returned 20 of their 22 starters from a season ago. Every citizen in the small town off of Interstate 81 hopes to party like it is 1970 around 2:00 this afternoon. The orange and black is back at Salem Stadium and ready to attack. 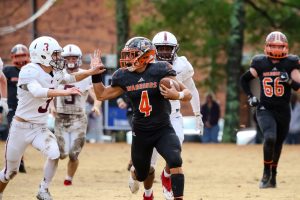