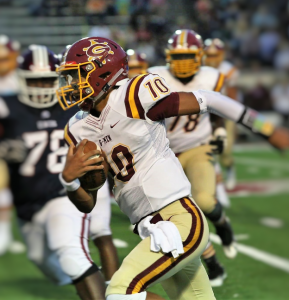 The 2018 season didn’t start the way that Graham head coach Tony Palmer had hoped for his G-Men. In their annual season-opening game, the G-Men found their selves down 28-0 in the second quarter to their cross town rivals, the Bluefield Beavers. That’s when Graham’s senior quarterback Cameron Allen scrambled for a 68-yard touchdown run.

With that touchdown, the G-Men righted the ship of their season.

It may have been too little, too late, to pull out the win in the “Battle of the Bluefields” that night, However, Allen and the gang have showed little mercy to any opponent since. The G-Men have been on a tear, outscoring their opposition 546-152 on their way to 13 straight wins. The most recent, a 57-14 thrashing of Radford, earned the G-Men a berth in the VHSL Class 2 State Championship game in Salem.

The G-Men are playing their best ball at the right time.

“The goal going in is you want to get better as the games go on,” said Palmer. “The guys are playing at a high level right now, so we’re just hoping that can continue that this week.” 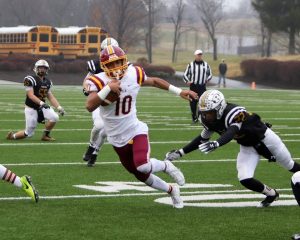 It’s no secret that the major reason for the G-Men’s success has been the play of Allen. The Purdue University commit has accounted for over 4,100 total yards this season, while accounting for an astounding 57 touchdowns. In the state semi-final game, Allen threw for four touchdowns to four different receivers, rushed for two more scores, all while recording an interception and a forced fumble on defense. That was all before halftime.

“Cam has had an outstanding season,” said Palmer, who has compiled a 35-5 record in the last three seasons. “The defense has to defend him as a runner and passer so he uses that to his advantage. He doesn’t try to force anything because he knows he has good players around him that can make plays. The game comes to him naturally.”

Allen’s supporting cast has been stellar as well. Junior athlete Devin Lester has proved to be the favorite target in the passing game, accounting for over 1,000 yards and 20 touchdowns. 6-foot-3 senior Chris Shinault, who has caught a touchdown pass in the last three games, provides a big target on the outside for Allen. Joey Dales likes to get in on the action in the passing game when he isn’t busy kicking the ball for the G-Men. Graham also touts one of the biggest backfields in the state, with bruisers Tre’ Booker (5’9″, 215) and Jaziere Reed (5’9″ 225) taking handoffs from Allen. Opening up the running lanes are 6-foot-7, 275-pound Gabe Sesco and  the talented 6-foot-8, 280-pound Brody Meadows, who holds a scholarship offer from the University of Virginia.

Not to be overlooked is the Graham defense. Led by linebackers Nick Kastner & Aaron Edwards, the G-Men have only given up 11 points per game in their 13 wins. Mason Raley and Landon Atkins shore up the defensive line for the G-Men, while Allen, Lester, Shinault and Isaiah Justice act as the last line of defense in the secondary. 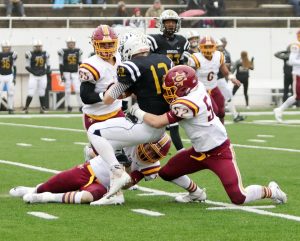 The G-Men defense needs to be on the same page this week. In their way of a fourth state championship is the 14-0 Goochland Bulldogs, led by first year head coach Alex Fruth and a potent Wing-T offense. The engineer of the Bulldogs’ offense is quarterback Devin McCray. McCray, who is said to be the best athlete on the team, rushed for 112 yards and three touchdowns in Goochland’s 35-21 over East Rockingham in the state semi-finals. His backfield partner, sophomore tailback Conner Popielarz, rushed for 174 yards and two scores against the Eagles.

The Bulldogs’ defense is anchored by their leading tackler, Sam Brooks, a 6-foot-3, 215-pound senior linebacker. McCray also plays a pivotal roll on defense in the secondary, as he intercepted an East Rockingham pass from his defensive back position. C.J. Towles and Perry Snead-Johnson also picked off the Eagles’ quarterback.

“Goochland is extremely athletic, they have great speed, and they have pretty good size. Their defense plays hard,” said the Graham head man. “On offense, they have more of an old-school mentality. They’re going to try to shove the ball down your throat and if you can’t stop it then you’re in for a long game.”

Graham is back in the state championship game for the first time since the 2001 season, when Glynn Carlock and Ahmad Bradshaw still roamed the sideline for Graham. The G-Men finished as runner-ups that season after losing the title game to Harrisonburg.

Tony Palmer knows what his team has to do to come away with a win this go-around.

“We have to play Graham football. We have to go to Salem with a chip on our shoulder that we’re going to get the job done regardless of what happens,” said Palmer, who was the tailback on the 1989 state championship Graham team. “We’ll have to hold on to the ball and force them to play our style of football if we want to be successful.”

Successful is a word that has been historically synonymous when it comes to talking about Graham football. After some lean years following Carlock’s unexpected passing, the G-Men have rose to the top of the western part of the state once again.

For some, a 13-win season with a district and region championship would be plenty to hang your hat on. That’s not the case for these G-Men.

“Since we started this year our team motto has been ‘Finish,'” said Palmer. “So we’re trying to finish and accomplish what we set out to do.” 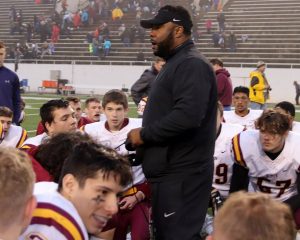