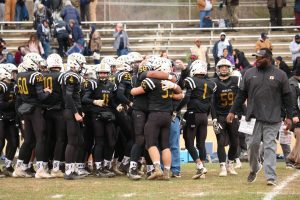 It was a busy Saturday in the New River Valley. Two high school regional championships were played along with Virginia Tech and Virginia battling for the Commonwealth Cup. Top-seeded Radford played host to the third-seeded Appomattox Raiders for the Region 2C Championship.

As we approach the final two weeks of high school football, one thing is certain.  Appomattox will not contend for the Class 2A state title. After trailing 17-7 early in the game, Radford (12-1) battled back and defeated the three-time defending state champions 28-25. The Raiders four-year undefeated streak against 2A opponents came to an end.

Appomattox (11-2) received the opening kickoff and went to work. Running back Cristian Ferguson blasted the middle of the Bobcat defense picking up chunks of yards for the Raiders but his momentum came to a halt. Radford stiffened once Appomattox got into their territory and forced the Raiders to attempt a field goal. Place-kicker Nick Farris nailed the 37-yard attempt to give the Raiders a 3-0 lead.

After forcing a three-and-out, Appomattox got the ball back and started driving down the field again but the drive stalled out, bringing on another field-goal attempt. P.J. Prioleau used his quickness and agility to sprint into the back field and leaped out to block the field goal. Justice Marshall scooped up the loose ball and sprinted 66 yards to pay dirt for the Bobcats first score. 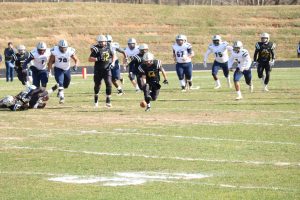 Radford lead 7-3 and looked to have the momentum. That was until the following kick, when Coleen Shaw returned the kick off 99 yards to the end zone. Appomattox regained the lead 10-7 near the end of the first.

While all the first quarter points came from the special teams, both offenses started rolling in the second.  Ferguson broke out for 42 yards and put Appomattox in scoring position. Shaw finished the drive with a 2-yard touchdown plunge to extend the lead 17-7 with 8:56 remaining in the half. Radford took control from there, scoring 21 unanswered points.

First it was Marshall who picked up his second score of the night on a fourth-and-seven play up the middle from 40 yards out, bringing the score within a field goal. On the ensuing kick, disaster struck the Raiders as they coughed the ball up in their on territory. The Bobcats capitalized on the turnover as Prioleau took the pitch from quarterback Zane Rupe then tossed it into the end zone to Marshall from 10 yards out. Radford lead 21-17 at the break.

Neither team found pay dirt in the third quarter. With 2:52 remaining in fourth Prioleau finally got loose as he took the hand-off up the middle, flying past the Raider defenders. Radford extended their lead to 28-17.

Appomattox never gave up. On the following possession they marched down the field behind freshman quarterback Tre Lawing. Lawing connected with Jacob Scott for a 14-yard touchdown reception with 1:11 remaining. Radford knew the onside kick was coming next and they recovered the kick, securing the win and prevailing as the Region 2C champions.

Radford advances to the state semifinals where they will host the 12-1 Graham G-Men.