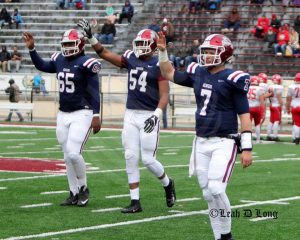 As prolific as the Bluefield Beavers’ offense has been this season it’s easy to see why at times their defense is overlooked.

This was not the case on Friday.

With the third ranked Bridgeport Indians coming to town with a trip to Wheeling Island Stadium on the line, the Beavers’ defense showed that they were not to be overlooked. Bluefield held the high-octane Indian offense to just two touchdowns in a 35-14 state semi-final win.

Bluefield’s defense started the game strong, forcing a three and out on the Indians first drive. Chandler Cooper and the Beavers took over on their own 40 yard line and methodically drove the ball down field. Fullback Arnold Martin finished off the drive with a 22-yard scoring run to put the Beavers on the board first. Kaullin Parris’ point after attempt was good to bring the score to 7-0 with only half of the first quarter completed. 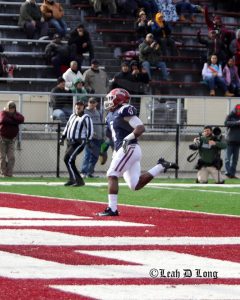 Not to be shown up, the Indians answered with a drive of their own. Wide receiver D’Andre Hollaway got behind the Beavers pass defense for a 51-yard pass from quarterback Devin Vandergrift. Fullback Trey Pancake punched it in from there and Evan Ogden’s extra point was good. With four minutes to go in the first quarter, the folks in nature’s air conditioned city had a tie ball game.

That would be as close as it would get for the Indians. On the ensuing drive, Bluefield’s Jamere “Juice” Edwards took the handoff and scampered 52 yards to pay dirt. Parris added his second extra point of the day to put the Beavers up 14-7 with 3:30 left in the first quarter.

Bridgeport’s offense showed signs of life in the second quarter but its drive was halted when Bluefield’s Ronnell Blevins picked off a Vandergrift pass in the end zone. Both offenses struggled to a scoreless quarter, giving the Beavers a 14-7 halftime advantage.

Bluefield came out of the gates strong in the second half. After a 52-yard run by Arnold Martin on the first offensive play, Cooper called his own number for an eight yard touchdown run. Parris made the score 21-7 after 20 seconds had ticked from the third quarter clock.

After another strong defensive effort by the Beavers, Sean Martin blocked Ogden’s punt on fourth down giving Bluefield the ball at the Indians’ 37 yard line.

A short time later, Cooper found the reliable Jaheim House in the end zone for an impressive touchdown grab. With 2:50 to go in the third quarter, Parris’ kick made it 28-7 in favor of the home team. 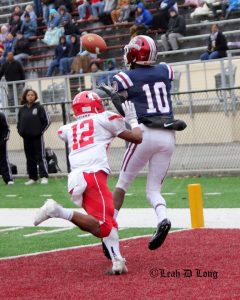 Bridgeport’s offense had success early in the fourth quarter when Jake Bowen’s two yard score cut the lead to 28-14. Bowen, a senior, came into this game with 2,200 yards and 34 touchdowns on the year. Bluefield was able to hold the impressive tailback to 80 yards in his last game for the Indians.

With the momentum on their side, the Indians’ defense forced a punt by Parris. With the Indians driving downfield, Vandergrift dropped back and looked for his favorite target Hollaway. However, Bluefield’s Isaiah Johnson was looming and made a leaping interception. The #1 cornerback in the 2021 class turned on the jets and returned the pick 53 yards for another Bluefield touchdown. Parris rounded out the days scoring to give the Beavers a 35-14 win and a second trip in as many years to the state championship game. 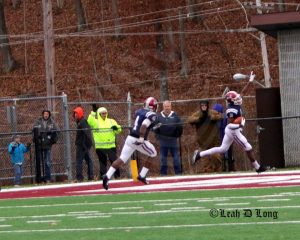 Arnold Martin led the Beavers’ rushing attack on the day with 112 yards and a touchdown. Edwards added 88 yards and a score of his own. Cooper added 70 total yards and accounted for two touchdowns on the day.

Bluefield’s defense held the Indians to 112 rushing yards and 120 passing yards. The Beavers forced four turnovers on the day.

The Beavers will travel to Wheeling next Friday for a state finals rematch vs. the Fairmont Senior Polar Bears.