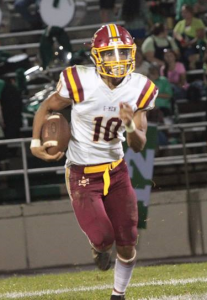 As Alex Tabor said on Twitter Friday night, there are three things you can count on in life.

While that may hold true this season, the game itself will be an uphill climb.

Richlands (8-4) and Graham (11-1) met in this same venue five weeks ago; a 45-0 embarrassment as Graham won the Southwest District.

Graham features speed and size, a rare combination in the lower classes of the VHSL. Keyed by superstar quarterback and cornerback Cam Allen — who will head to Purdue when he walks across the stage in the spring — the G-Men haven’t lost since the first week of the season to Bluefield.

Oh yeah, Bluefield will play for a state title next weekend in West Virginia.

Since that shutout, Richlands has found a spark on defense, giving up 18 (all 18 coming against the JV defense), 14, 0 and 21 points against three playoff teams.

Seniors Sean Toney and Dylan Adkins have come up big when it was needed, and they’ll have to do that again against the heavily-favored G-Men.

Look for Richlands to try and ground out the game with long drives, trying to limit Allen’s impact.

For Graham, it will be much of the same as the first meeting: make sure your superstar has the time and protection to do what he’s best at, make plays that leave you shaking your head.

The winner will go on to play at Radford on Dec. 1st for a chance to play for a state title.

Kickoff is slated for 2 p.m. inside Mitchell Stadium today.