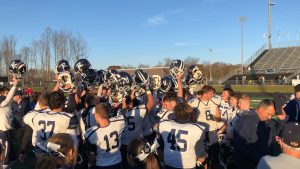 It was quite the afternoon on Saturday on Rose Ridge.

Richlands traveled to Ridgeview for what was one of the most-anticipated matchups in southwest Virginia and came out on top with a 31-21 victory over the first seeded Wolfpack.

It looked like it would be a bad start, after a muffed kickoff forced Richlands to start the game on their own 2-yard line.

A resurgent Richlands (8-4) offense proved they were game, going 98 yards down the field for a 1-yard Trey Brown touchdown run, keyed by a long 53-yard pass from Race Moir to Taylor Horn.

However, Ridgeview (10-2) had the best player on the field, and they showed it right away.

Division-I prospect Trenton Adkins went 70 yards around the right side of the line to knot the score up at 7-7 in the first quarter.

Richlands had another chance to tack onto the lead in the first, but a Levi Forrest 37-yard field goal attempt flew wide right.

After a Blue Tornado fumble, Ridgeview again found the big play. A busted pass left RB Matthew Sexton wide open in the middle of the field, and he put on the jets for for the go-ahead score.

With two minutes left in the half, Moir lined up to pass, saw a lane and scrambled all the way into the end zone, knotting the game back up at 14.

Sean Toney, the senior defensive nightmare made his mark felt, as he hit Sexton on a backwards pass that was picked up by Richlands. A 21-yard Forrest field goal made it a 17-14 Richlands advantage at the half.

The Pack had its chances in the third quarter, but two fumbles proved costly. Both fumbles came inside the Richlands 10 yard line, and both were recovered by the Blues.

After a scoreless third quarter, the Moir-to-Horn connection sparked the Blues again.

After a stop on 4th down, Richlands got the ball and three plays later, it was pay dirt. Moir found Horn streaking down the sideline for a 50 yard touchdown.

After being corralled much of the game, Adkins again showed his elite speed, breaking another play to the outside for a 50-yard score of his own.

Up three with three minutes left to play, Coach Greg Mance had a decision to make. Do you play conservatively or do you put the nail in the coffin?

He got both at the same time.

A jet-sweep to speedy freshman WR Sage Webb was the perfect call against a defense slooking to stop the run up the gut, and Webb ran 56 yards to the house.

After the game, Mance told his team in the huddle, “That’s one heckuva team you beat today. I’ve never been more proud of you.”

A historic season on the Ridge came to a close, but it was nothing to hang your head at.

For Richlands, they go on to face Southwest District rival Graham on Saturday at 2 p.m. inside Mitchell Stadium.