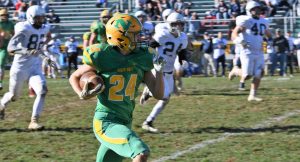 In the final week of the regular season, Parry McCleur (7-5) defeated Narrows (10-2) 35-34 to claim a share of the Pioneer District title. In the second round of the Region 1C playoffs, the Green Wave got revenge on their district foe, as they rolled the Fighting Blues 56-28. Matthew Morgan accounted for three scores in the Green Wave victory.

Narrows jumped out to a 14-0 lead as Morgan scored twice from one-yard out. McCluer got on the board late in the first quarter when quarterback Zach Claytor plunged into the end zone from two-yards out. Wyatt Freeman answered the Blues score when he connected with Chase Blaker for a 35-yard touchdown. After a missed extra point, Narrows lead 20-7. McCluer pulled within six points when running back Austin Moore scored from seven-yards out near the break. Moore suffered a serious head injury late in the third quarter and was taken from the field on a stretcher. The Green Wave went in at halftime with a slim 20-14 lead. 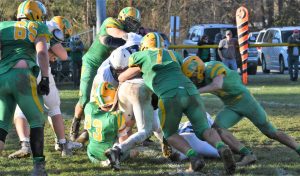 The second half was all Narrows, as they outscored the Blues 36-14. Slater Ferguson returned the opening kickoff 78 yards to pay dirt. On the Blues following possession, they were called for a holding penalty in their own end zone, giving Narrows two points for the safety. On their next possession Freeman went to the air again and connected with Isaac Taylor for the 57-yard touchdown reception.

By this point, Narrows had a comfortable 35-14 lead but the Fighting Blues kept fighting, literally.  Marcellius Dawson, who dominated Narrows in the first contest, scored from 17 yards out. On the next possession for the Green Wave, the tension grew stronger between the two teams. In a game that appeared “chippy” from the start, progressed into a fight late in the third. Punches were thrown, benches began to clear and bodies fell to the grown. Narrows assistant coach Clyde Turner was on the receiving end of a blow as he was knocked to the ground. After receiving medical attention, Turner returned to the sidelines. The madness ended with two McCluer players and one Narrows player ejected from the contest. The game continued on after the 45 minute stoppage. 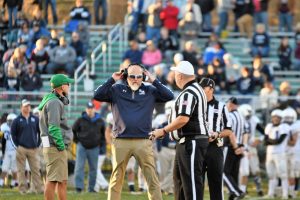 Narrows closed out the game with three more rushing scores. Morgan ran it in from one-yard out followed by a three-yard touchdown run from Blaker. Christopher Via found pay dirt from 65-yards out.

Dawson got McCluer on the board again with a four-yard touchdown plunge. Dawson only rushed for 65 yards on 15 carries. Quarterback Zach Claytor completed 16-of-32 in the air for 237 yards.

Morgan rushed for 55 yards on 12 carries with three touchdowns. Freeman completed 13-of-18 passes for 215 yards and two touchdowns.

Narrows will return to the Region 1C Championship as they travel to Galax for a rematch from last year’s championship.