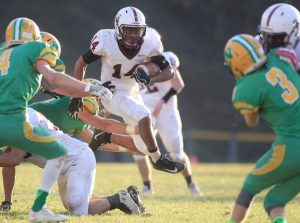 This time last year, Galax and Narrows were preparing to go to battle for the Region 1C championship. In a game that came down to the final seconds, the Maroon Tide escaped Ragsdale Field with a 28-27 victory over the Green Wave. After rolling their first two opponents in this post season, Galax (10-2) and Narrows (10-2) will meet again for the region championship, however, this year Narrows will travel to Galax.

Last week, Galax defeated George Wythe 42-14 in a rematch from earlier in the season. Running backs Blake Brown and Caxton Vaught combined for 349 rushing yards and four touchdowns to lead the Tide to victory. In 10 games, Brown has 1,264 rushing yards and 11 touchdowns averaging 7.7 yards per carry. Brown did not play in two games during the regular season due to injuries. Vaught has 646 yards and seven rushing touchdowns on the season.

Aside from two powerful running backs, Galax also has two alternating quarterbacks, Cole Pickett and Gage Cooke, that combine for nearly 2,000 passing yards and 22 touchdowns. In head coach Mark Dixon’s previous eight seasons at Galax, the Tide have never came close to that many passing yards. Cade Ashworth and Landon Dickson are the go-to receivers. Ashworth has 39 receptions for 568 yards and five touchdowns, Dickson as 24 receptions for 420 yards and seven touchdowns.

Quarterback Wyatt Freeman has accounted for most of the Green Wave success. Freeman was 13-of-18 for 215 yards and two touchdowns in the 56-28 victory over Parry McCluer last week. He finished the regular season 90-of-148 for 1,494 yards and 18 touchdowns. So far in the post season, he is 23-of-35 for 407 yards and four touchdowns. His go-to receive is Chase Blaker, who has 10 touchdown receptions and over 700 yards receiving. Alongside Freeman is running back Matthew Morgan. The Green Wave tailback has over 850 rushing yards on the season and four touchdowns in the post season.

The winner of this game will advance to the state semifinals and play the Region 1D champion, Chilhowie or Patrick Henry.

This game will kickoff at 2 p.m. on Friday.