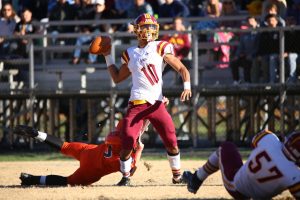 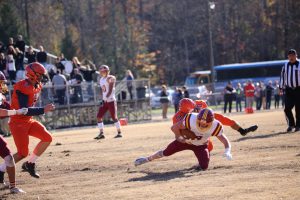 BIG STONE GAP, Va.,-Consider any demons exorcised. Behind a dominant defense and a big play offense, the Graham G-Men rolled into Bullitt Park and routed the Union Bears 28-7 in the Region D semi final. Bullitt Park had not been kind to the G-Men in recent history, as the Bears had ended the G-Men’s season in two prior occurrences in Big Stone Gap. Not this time. The third time was the charm for G-Men head coach Tony Palmer.

From the opening kickoff, Graham had their way. After winning the toss and deferring to the second half, the G-Men forced Union return man Avery Jenkins to fumble. Graham recovered, but the Union defense stood tall. The Bears defense held firm on the first two Graham possessions that got inside the five yard line, but the Union offense was shut down by an aggressive G-Men defense.

After forcing a Union punt, the third time was the charm for the Graham offense. Cameron Allen, the fantastic dual-threat quarterback, drove the offense down and scored on a one yard plunge to open the scoring. After G-Men defensive back Devin Lester picked off an errant pass from Bailey Turner, Graham showed off their explosive tendencies. Allen connected with Joey Dales for a 40-yard touchdown pass on the first play following the change of possession. Dales’ extra point gave Graham a 14-0 lead in the opening stanza.

Union finally manufactured some offense in the second quarter, when Jenkins busted free and scored from 50 yards out to cut the lead to 14-7. As time was expiring in the half, Graham struck for what turned out to be the back breaker. Allen drove his offense down the field and connected with Christopher Shinault on a 28-yard touchdown pass with eight seconds remaining to give the G-Men a 21-7 halftime lead.

The second half was dominated by the Graham defense. The Union offense never gained any momentum and was consistently shut down. The Bears running game was held completely in check. The Graham offense had some issues of their own, fumbling twice in the third quarter, but when Jazaire Reed scored from five yards out early in the fourth quarter, the G-Men knew their ticket was punched for a Region D title game appearance.

Allen had a spectacular outing one year after taking a physical beating on the same field. He completed 16-of-25 through the air for 271 yards and two touchdowns and added one score on the ground. Devin Lester was all over the field on offense and defense, making big receptions on crossing routes and harassing Bear receivers all game.

Graham will meet Richlands, who upset the top seeded Ridgeview Wolfpack, in the Region D championship game this Saturday at Mitchell Stadium in Bluefield, VA.