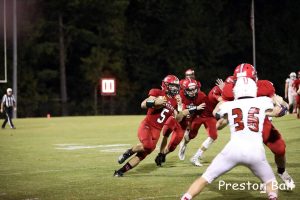 It is a term that Seth Stanley has familiarized himself with during the last two years of his life.

The Lebanon speedster watched the final six games of the Pioneers’ season in 2017 due to a season-ending injury.

As a senior, Stanley and the Pioneers finished 2-8 on the season.

The waters in Russell County were not always the easiest to tread. However, Stanley and the group never gave up.

The 6-foot, 195-pound senior tailback rallied back to have the best season out of the backfield in the Southwest District. No. 5 in red finished the season with a district-best 1,653 yards and 16 touchdowns.

Heading into the final game, Lebanon’s record stood at 1-8 before returning to Harry Stuart Field for senior night with the Tazewell Bulldogs. Coach Michael Webb and his gang needed to finish the season strong.

Behind Stanley’s 284 yards and four touchdowns, the Pioneer cruised to a 35-12 win over Southwest District rival Tazewell in the regular season finale.

Stanley’s performance was enough to give him the nod as the CoalfieldSports.com Offensive Player of the Week in week 11.

“It was amazing to finish the season on a team win. All of my guys worked hard throughout the season,” Stanley said. “We deserved to win, especially it being thr last game on our home turf.”

Coming into the November 2ndcontest with Tazewell, the Pioneers sought to avenge a 53-0 loss to Tazewell a season ago. Stanley knew early in the week what his squad had to do to defeat the Bulldogs.

“I knew Tazewell had good athletes and a strong line coming into the game,” Stanley stated. “If we were going to win, my line would have to block better and defensively, we would have to play better than we have all year. I knew if we played Tazewell hard like we were capable of for all four quarters that we would finish the game on top.”

Stanley did not look far for motivation heading into the season finale.

“My emotions were all over the place during pregame because I knew it was the last time playing under the lights for the Town of Lebanon,” Stanley said. “I have been playing on Harry Stuart Field since I was six years old. Thankfuly, I was able to get those emotions in check before kickoff. I told myself, ‘Ball out dude, this is your last one.’”

Ball out is just what Stanley did.

As the night progressed, Stanley’s number kept getting called. It was called 46 times to be exact. The yards were plentiful and the end zone became Stanley’s second home by the end of the night.

“High fives were being given all around and there were a lot of smiles on the sideline and the field,” Stanley said. “Those are the best games to play when everything you do feels right and ends positive. Everything was in sync that night. It felt like all of the stars were aligned. The emotions I felt during that game were amazing and I will never forget them.”

As any great running back does, Stanley credits those around him before he credits himself.

“The coaches made the right calls, the line blocked the right way and I ran the ball the hardest that I could,” said the Lebanon tailback. “I came into every Friday night with the same mentality. I knew if I was going to have a good night, the big guys on the line would have to execute well. They performed very well against Tazewell. They played tough and gave me some running lanes. I just used my speed and vision.”

At the end of the night, behind the strong team effort, the Pioneers picked up their second win of the season while snapping a two game losing streak.

“I knew coming into the game we had an opportunity to pick up a win to end the season on a positive note,” Stanley said. “Fortunately, we created some turnovers and capitalized on them and picked up a big win.”

The 284-yard, four touchdown performance is just the punctuation on a great career in red for Stanley. Coming off of an injury that robbed him of more than half of his junior year, Stanley had high expectations for his senior year.

“It was my senior season. I knew the excuse of ‘there’s always next year’ wasn’t an option,” Stanley said. “With my knee injury, taking me out six games last year, I knew I had something to prove coming back. I was hungry all off-season wanting a big year as a senior. I’m grateful that all my hard work and dedication paid off with me finishing on top.”

For Stanley, getting to represent his town as a member of the Pioneer football team the past four seasons has been a dream come true.

“My mother has taught at Lebanon High School my entire life. She carried me through the halls of LHS before I was born. Since kindergarten, part of my school day has always been at LHS,” Stanley said. “My whole life I have been a Pioneer and dreamed of playing here on Friday nights and representing this school.”

Stanley knows he will forever look back on the past four years with a smile.

“Not a lot of people get to be in the shoes I have been, I was blessed with the ability to to play the sport I loved, with a team I loved in front of a town that is in love with it,” Stanley said. “I’ll never forget these four years playing football for Lebanon. I know they will be some of the best memories of my life.”

Lebanon dawned fewer numbers than many of their other southwest Virginia counterparts in 2018. However, this did not change the mindset of the Pioneers.

“We never quit. No matter a win or loss on a Friday, we came in on Monday ready to work. My coaches and team never gave in to self-pity. When only 26 players show up for the first day of practice, we could have easily just said forget it and gave up, but we didn’t,” said Stanley. “I am super grateful to have the team I did for my senior year. We are definitely a family on and off the field. No one quit and no on gave up. I will always remember this season for the courage and strength it took for us to strap on the gear every Friday night and play in the toughest district around.”

While Stanley smacked adversity in the mouth during his final two years at Lebanon, he looks to the future with the same mindset.

“I don’t know what is in store for me. I plan on working hard until I find out,” Stanley said. “I love the game and believe I have a few more years left. Regardless, I will be going to college and getting my degree.”

Don’t expect the residents of Lebanon to forget anytime soon the days that number 5 galloped down the sidelines for the Pioneers.