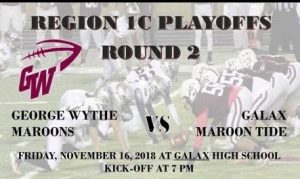 As teams advance to the second round of the regional playoffs, the games start getting tougher. You also begin to see multiple rematches take place. This week, Galax (9-2) and George Wythe (7-4), two powerhouse programs from Region 1C, will battle for the second time this season.

Galax won the first meeting in week seven, 21-14. The Maroons held on to a 14-7 lead going into the fourth quarter but the Tide scored two touchdowns to close out the game. Blake Brown, the running back for Galax, was the difference maker in that game. Brown rushed for 177 yards on 25 carries. While Brown never scored, he played a major role in getting the Tide in scoring position. Brown did not play in last week’s playoff game.

Galax thumped Eastern Montgomery 55-8 last week in the first round of the playoffs. Cole Pickett and Gage Cooke, the alternating quarterbacks for the Tide, combined for 308 passing yards and seven total touchdowns. Pickett was 5-of-11 through the air for 142 yards, four touchdowns and one rushing touchdown. Cooke went 6-of-7 for 166 yards, one touchdown and one rushing touchdown. The two combined for 1,500 yards through the air and 15 touchdowns in the regular season.

Leading the Maroons this season is quarterback Cole Simmons and running back Ravvon Wells. Simmons finished the regular season near the Timesland top 10 in passing yards. He was 77-of-144 for 1,293 yards and 14 touchdowns. He also rushed for 693 yards on 139 carries. Against Galax, he was 10-of-19 for 113 yards and one touchdown. Wells finished in the Timesland top 20 with 986 yards on 178 carries and 14 touchdowns. He was held in check against Galax in the first meeting as he only carried the ball 14 times for 30 yards. He did however have an 80-yard touchdown reception which gave Wythe the 14-7 lead late in the game.

The winner of this game moves on to the regional championship to play the winner of Narrows and Parry McCluer.