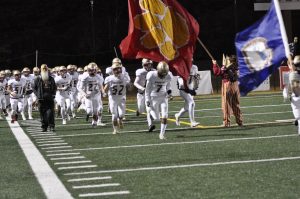 While Blacksburg (11-0) is expected to make it to the Region 4D championship, they cannot look past their district foe Pulaski (8-3). These two are the only teams remaining from the River Ridge District as Jefferson Forrest shocked the region by eliminating three-time defending 4A champion Salem. The Bruins squeezed out a 21-14 victory over the Cougars in week eight. The contest started as a shootout in the first half, but ended with a scoreless second half for both teams.

Leading Blacksburg to a flawless record thus far is the senior gun-slinger, Grant Johnston. In last week’s 43-6 first round victory over Liberty Christian Academy, Johnston was 8-of-14 for 147 yards and two touchdowns. He also rushed for a 28-yard touchdown. In the first meeting against Pulaski, Johnston was 15-of-26 through the air for 169 yards and one touchdown but was picked off two times. He finished the regular season as runner-up in the Timesland with 2,303 passing yards and 28 touchdowns. His go to receiver is senior Thomas Coffey. Coffey scored on a 76-yard touchdown reception against Pulaski in the first meeting. He finished the regular season in the Timesland top ten with 38 receptions for 787 yards and 11 touchdowns. Karim Mohomed is another weapon for Johnston to utilize. Mohomed has 35 receptions for 523 yards and nine touchdowns on the season. Brian Mitchell leads the rushing attack with 670 yards on 105 carries. 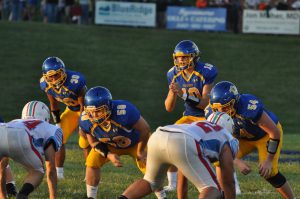 Grant Johnston has thrown for 2,300 yards this season (photo by Shannon Lowery)

Pulaski returned home last Friday night with a hard fought 17-14 victory over GW Danville. The Cougars have quite a bit of talent as well with the duo of Kade Akers and E.J. Horton. Last week, Akers was 9-of-16 for 123 yards. While those may not be the greatest statistics for a quarterback, what does stand out is that all those completions went to Horton. This is why most teams make sure to key on him when they play Pulaski. Blacksburg did just that as they held Horton to 39 yards on five receptions in the first meeting. Horton did however return a kickoff against the Bruins for an 80-yard touchdown. He has 46 receptions for 750 yards and nine touchdowns on the season. Akers is 87-of-156 for 1,240 yards and eight touchdowns through 11 games. Pulaski also has a duo of running backs in Gage Mannon and Jakari Finley. The two combine for over 1,500 rushing yards thus far. Mannon intercepted Johnston in the first meeting on the third play of the game then ran for a 66-yard touchdown on the first play of the Cougars possession. 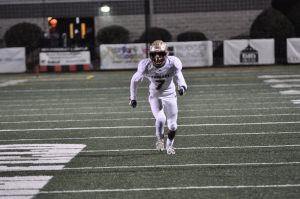 The Bruins will again be without their star athlete Tiquest Terry who broke his hand in week seven. The winner of this game will play either E.C. Glass or Jefferson Forrest in the regional championship.

This game is scheduled for Friday but has been moved to the turf field at Christiansburg High School. Kickoff at 7 p.m.