The rematch between the Falcons and Cavaliers has been three years in the making since these two programs met in the playoffs.  The Cavaliers won that contest 39-28 on a brisk night in Daleville.  Abingdon has been itching for the chance to redeem themselves against teams all season.  To this point, they have been successful with wins over Ridgeview, Union and Hidden Valley.

Abingdon rolled in the recent weeks of the regular season and it has carried over to the playoffs.  The Falcons have not lost a game since September 21st.  This is in part to the tenacious defense the Falcons have playing.  The past two games Abingdon has only allowed teams less than 30 yards of total offense each.  While Martin Lucas, William Seymore and Sean Canada have been grinding out yardage on the ground, Gabe Boothe has executing Coach Amburgey’s offensive scheme with confidence and stability.  Defensive Coordinator Ryan Nutter has the Falcon defense flying around and making plays all over the field.  Six players on defense have over 54 tackles on the year.  The Falcons will be tested this week on the defensive front by a stout Cavalier running game.

This game will be a rematch from 2015.  The game appears the same but the faces are different.  No longer is there a Sturgill, Yates, Fulton or Wallace. Abingdon has a new group of seniors leading the charge into this playoff run.  Gabe Boothe, Jake Crosswhite, TJ Taylor, William Seymore, Tyler Thayer, Sean Canada have become a driving force to much of the Falcons success this year.  Likewise, the Cavaliers look different as well.  However, this time they will face the Falcons who are peaking at the right time of the year going to face the Cavaliers.  This will be a tall task for the Falcons to see if they can knock off a team they have history with again in the second round of the playoffs. The question is who can win at the line of scrimmage this Friday, they could be the team leaving victorious.

The Cavaliers QB has become a dangerous threat in Jamie Harless’ game plan.  Eller will look to keep the momentum going in the Lord Botetourt offensive attack this week.  He has speed and exceptional vision.  Eller and his offense will certainly look to carry over that momentum after a big win last week in round one win 62-6.  Look for Wilson to leave it all on the field Friday. 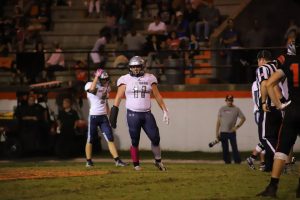 Jake Crosswhite has been a force in the middle of Abingdon’s defense this year from his middle linebacker position.  Crosswhite seems to always be in opponents backfield for the past month and wreaking havoc on opposing offenses ground games.  He comes into this game with 58 tackles, 2 forced fumbles, fumble recovery and 1 defensive TD.  This is certainly attributed to the pressure that has been applied by the front seven.  Defensive coordinator Ryan Nutter has been mixing up pressure and coverages with the linebacking corps all season getting pressure on offenses.

Don’t get caught looking ahead- The Cavs will need to stay focused.  If they allow the Falcons opportunities.  The Falcons will take advantage of them.