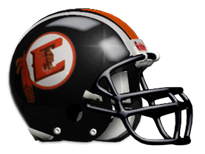 CHILHOWIE, Va.,-The Chilhowie train keeps rolling. The Warriors scored early and often in route to a dominating 49-0 win over the visiting Eastside Spartans in the first round of the Region 1D playoffs. Led by dynamic quarterback Zack Cale, Chilhowie scored 14 points in the opening stanza followed by 21 points in the second to build a commanding 35-0 lead at the half, a deficit that proved insurmountable.

The Warrior offense gets all the publicity but the defense posted another stellar performance in the shut out. Eastside was held to 126 total yards for the game and big play quarterback Jordan Rasnick was swarmed all day into a 2-of-12 outing. Rasnick threw the only touchdown pass Chilhowie has allowed all season in The Spartans’ 46-7 loss to the Warriors earlier this season. The stingy Chilhowie defense has allowed 66 points through 11 games on the season, limiting opponents to a mere six points per game.

The big play offense for Chilhowie was evident from the start. Greg Sanchez, the explosive running back, struck first with a nine-yard rush to open the scoring. After that, it was the Cale show. The senior signal caller was involved in four of the next five Warrior touchdowns, rushing for three scores and finding one of his favorite targets,Jake Kegley, for a 40-yard scoring pass to strike first after the half. Kegley is both a figurative and literal huge target, standing at six-foot-seven. Anthony Blevins and Jonathan Gilley also found the end zone as runners to fill out the box score.

While Cale led the attack, it was the senior runner Sanchez who hit a major career mark. The all-time leading rusher for Chilhowie, Sanchez broke the 5,000 career rushing yard mark early in the third quarter. The individual accomplishments are great, but the only goal the Warriors are entertaining right now is a state championship. After coming up just short last season, Chilhowie has maintained a laser focus the entire year. No team has scored more than 23 points against the defense while the offense has scored over 30 points in each game, breaking the 50-point mark in four games.

While the Spartans end the 2018 on a sour note, coach Mike Rhodes had a successful first season at the helm for Eastside. Rhodes led the team to the playoffs for the second consecutive season and posted a 4-1 record against Cumberland foes.

Chilhowie coach Jeff Robinson has no time for his team to savor this victory, with the Warriors hosting Grundy (7-4, 3-0) in the Region D semi finals.