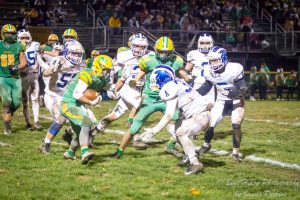 Wyatt Freeman finished with 266 total yards to lead Narrows (9-2) to an 18-7 victory over Auburn (5-6) in the first round of the regional playoffs. Like the game in week one, this was a low scoring contest but this time the Eagles had to play from behind. Auburn led Narrows 21-7 when the two played the first time.

Freeman gave the Green Wave a 12-0 halftime lead, using his legs from one and three yards out. Both extra points were missed by Matthew Morgan. Morgan extended the lead to 18-0 when he punched it in from one yard out in the third quarter. Narrows went for two but Auburn broke up the pass.

Narrows shut the Eagles out until the fourth quarter. Auburn, who finished with 138 total yards of offense, got on the board with a three-yard run from Carson East midway through the fourth

Freeman completed 10-of-17 passes for 192 yards and rushed for 74 yards on 14 carries. Chase Blaker had four catches for 71 yards followed by Isaac Taylor who had three catches for 70 yards.

Narrows looks to get revenge from week 10 as they host Parry McCluer in the second round this Friday at 7 p.m.