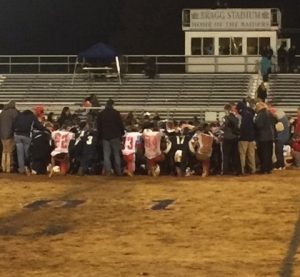 For the third straight year, Giles (5-6) fell to Appomattox (9-1) in the playoffs. The Raiders showed that despite having a young team, they still have a chance at making it to the state title game for the fourth straight year. Appomattox thumped the Spartans 35-6 at Bragg Stadium to advance in the regional playoffs. Giles finishes 2018 with their first losing season since 1987, a streak that ranks near the top of all Virginia schools.

Both teams were fired up during warm ups. Giles, who lacked emotion during the regular season showed that they would not lay down to the three-time defending champs. You could hear one of the captains shout, “If you don’t think we can win, then get back on the bus,” as the Spartans huddled up before kick-off.

The duo of Cristian Ferguson and Tre Lawing combined for 234 of Appomattox’s 315 yards of total offense.

Ferguson got his first score of night on the Raiders opening drive. After pounding the Spartan defense up the middle, he went 28 yards to the end zone on an option play. Raiders jumped out to a 7-0 lead early in the first.

Giles looked to answer as they drove down the field in single wing fashion but stalled out inside the 30-yard line. That was the first of four stall outs in Appomattox territory as the Raider defense bent but did not break.

Collen Shaw increased the lead to 14-0 late in the first from 21 yards out as he fumbled the ball before the goal line but recovered it in the end zone.

The Spartan offense came alive again early in the second. Chaston Ratcliffe connected with Austin Perkins who took off sprinting towards the end zone but was caught from behind after gaining 68 yards. Two penalties and a tackle for loss moved the Spartans back to the 40-yard line where they had to punt. Giles got the ball back with under five minutes remaining in the half. After a three-and-out they had to punt inside their own 10-yard line. The shanked punt did not go far but it looked as if it touched an Appomattox player and the Spartans recovered. After a meeting between the officials, they elected to give the Raiders possession. Five plays later, Lawing found pay dirt from one yard out. Appomattox lead 21-0 at the break.

Lawing picked up two more scores in the third to put the score out of reach. He had a 22 and 19-yard touchdown run, to start the running clock while leading 35-0. Ratcliffe scored the lone touchdown for Giles from two-yards out late in the fourth but the extra point was blocked.

The Raiders will travel to Glenvar for the second round of the regional playoffs.