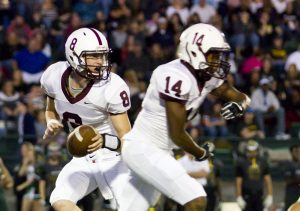 Top-seeded Galax (8-2) hosts Eastern Montgomery (3-7) for the first round of the Region 1C playoffs. Since 2010, the Tide have been a constant threat at the Class 1A level. Head Coach Mark Dixon is to thank for that. From 1986-2009, Galax only appeared in the playoffs four times but never went further than the second round. Since taking over in 2010, Dixon has taken Galax to the playoffs nine straight seasons. Galax made it to the final four the last three season, winning a state title in 2015. Their only losses this season are to 2A powerhouse Glenvar and 3A powerhouse Northside. The Tide secured the top seed in 1C with a 34-16 victory over Grayson last week, who is seeded fourth in Region 2D.

Cole Pickett and Gage Cooke alternate as the gun-slingers for Galax. Pickett finished the regular season completing 50-of-103 passes for 710 yards and five touchdowns. He was 7-of-17 for 181 yards and a touchdown last week against Grayson. Cooke finished with 50-of-87 passes for 834 yards and ten touchdowns. Cade Ashworth leads Galax in receiving yards with 312 yards on 32 receptions and two touchdowns. Blake Brown leads the Tide in rushing yards. He finishes the regular season with 1,060 yards on 140 carries and 14 touchdowns. He carried the ball 14 times for 93 yards last week against the tough Blue Devil defense.

East Montgomery made it into the playoffs for the first time since 2012. Their 42-20 victory over Craig County gave them enough points to slide into the final spot of 1C. The Mustangs struggled through the regular season, especially on offense. The Mustangs only averaged 13 points per game and were shut out four times. The Owens brothers Dylan and Devin, will have their hands full trying to find paydirt against Galax. Dylan plays quarterback for the Stangs. He finished the regular season completing 66-of-162 passes for 767 yards and four touchdowns. Devin leads the team in rushing yards with 846 yards on 139 carries. Justin Tyree leads the team in receptions with 26 for 260 yards and three touchdowns.