The Abingdon Falcons are set to open the 2018 playoffs in the friendly confines of Falcon Field for a rematch with the Hidden Valley Titans.  Earlier this season the Titans scored one of their three victories over the Falcons 37-25.  Heads oach Garrett Amburgey’s Falcons are riding a five game win streak that includes wins over Ridgeview and Union, two of the 2A powerhouse teams in the region.  Coach Amburgey looks for his Falcons to continue their dominance on both sides of the ball they have shown in the past month.  Abingdon (8-2) will certainly look for revenge going into this contest.  While Hidden Valley (3-7) comes off a narrow win last week against Cave Spring, 14-13.

Abingdon now has a three-headed monster in the backfield.  Martin Lucas is over the 1000-yard mark for the season.  William Seymore has been a scoring machine with his punishing run style with multiple scores in games.  Senior tailback Sean Canada is back healthy and adds another dimension to the Falcons ground attack.  Coach Amburgey has no shortage pretty of running backs.  Look for him to utilize all his weapons to stifle the Titans.

This game has all the making of a classic rematch.  Abingdon has matured since the last meeting and their run game has been a driving force to much of their success.  The Titans are looking for a win to keep their season going.  However, this time they will face the Falcons who are peaking at the right time of the year going into to the playoffs.  This will be a tall task for the Titans to see if they can knock off the #3 seed and playing a team that has already seen you.  The question is who has a trick up their sleeve this Friday.

The Titans running back has seven touchdowns this year and averages 3.6 yards per carry.  Wilson had his biggest game of the year against the Falcons with four touchdowns.  He has speed and exceptional vision.  The Titans are averaging a little over 16 points a game.  Look for Wilson to leave it all on the field Friday. 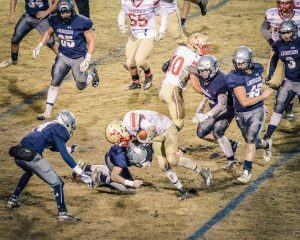 The front four in Abingdon’s defense have lived in opponents backfield for the past month and wreaked havoc on opposing offense’s ground games.  The Falcon defense has only allowed an average of 124 yards on the ground and 50 yards through the air in the last month.  This is certainly attributed to the pressure that has been applied by the front seven.  defensive coordinator, Coach Nutter has been dialing up pressure with the D-Line at a steady pace and the boys up front have responded.  These four will be ones to watch going through the playoffs.

Avoid the big plays- Abingdon has shown it has big play ability and the Titans need to avoid allowing the Falcons to strike quick and often.

Shorten the game- The Titans need to limit the number of offensive plays the Falcons have.  Abingdon can strike quick and often if given the chance to score.  The best defense for Hidden Valley will be long sustained drives by their offense.