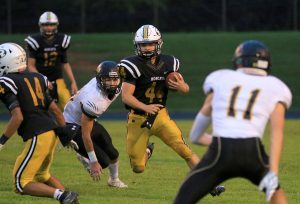 When you talk about teams having turn-around seasons, Radford is at the top of the list. After finishing 2-8 in 2017 and not making it to the playoffs, the Bobcats finish this regular season 9-1 with the top seed in Region 2C. Last week gave them their seventh straight win as they defeated Glenvar, 17-7 and returned home as champions of the Three Rivers District. While they had an impressive regular season, the post season is where it counts. The Bobcats must focus their attention on Fort Chiswell (5-5) as they host the eighth-seeded Pioneers in the first round of the playoffs in a rematch from week three. Radford won that contest, 26-6.

P.J Prioleau has played a major role in the Bobcats success. The elusive sophomore running back finished the regular season with 1,245 rushing yards and 13 touchdowns. He averages 117 rushing yards per game. Prioleau scored on an option play late in the fourth against Glenvar, securing the win for the Bobcats. While Prioleau brings the quickness, Justice Marshall brings the power. You can expect Marshall to be the lead blocker for Prioleau on most plays but when the Cats need a short conversion, he will likely take the handoff. He also leads the Radford defense with 47 solo tackles at his linebacker position. Zane Rupe is the gun-slinger for the Bobcats. He has completed 81-of-134 passes for 909 yards and nine touchdowns. Rupe also has 309 yards on the ground with six rushing touchdowns. Radford has a stout defense to go along with their high-powered offense. Since giving up 41 points in their loss to Galax, the Bobcats only allow eight points per game.

The Pioneers squeezed their way into the playoffs with a 29-7 win over Bland County. Fort Chiswell will begin their post season without their star running back Denver Brown. Brown suffered a serious leg injury against Galax in week six. He rushed for 114 yards and two touchdowns before his injury. The Pioneers gave top seeded Galax all they wanted but when Brown went down, the game changed quickly and the Tide pulled away. Through six games, Brown rushed for 969 yards and 11 touchdowns.

The winner of this game will play the winner of Gretna and James River, two teams that Radford defeated in the regular season.

This game has been moved up to Thursday, kickoff at 7:00.