The Green Wave and Eagles are set battle in the first round of the Region 1C playoffs. This game will be a rematch from week one where Narrows (8-2) came from behind and topped Auburn (5-5), 23-21. The Wave fell to Parry McCluer last week, 35-34 and had to share the Pioneer title. The Eagles finished their regular season with a 35-7 victory over Rural Retreat.

There is no secret as to what the game plan for Auburn will be; ground-and-pound. As a team, the Eagles have rushed for 2,878 yards along with 37 rushing scores. Kelly Payson, Triston Perry and Carter Brookman lead the rush attack for Auburn. Payson has 657 yards on 105 carries and 12 touchdowns. In the rare occasion of Auburn passing the ball, Payson acts as the quarterback. He is 11-of-27 for 166 yards and a touchdown through the air. Payson rushed for 130 yards on 25 carries in the first meeting against Narrows.  Perry has 562 yards on 64 carries and three touchdowns. He averages 8.8 yards per carry. Brookman has 544 yards on 112 carries and 11 touchdowns. He is also the place-kicker and is in the Timesland top 10 for scoring with 112 total points. 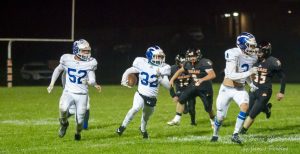 Narrows is led by senior quarterback Wyatt Freeman. Freeman finished the regular season with 89-of-147 passing for 1,463 yards and 18 touchdowns. He only threw two interceptions, one of which happened last week on their final drive. Freemans favorite target is Chase Blaker. Blaker has surpassed 600 receiving yards to go along with nine touchdowns. Beside Freeman is running back Matthew Morgan. Morgan amassed 700 yards rushing on the season with 14 touchdowns. He is also the place-kicker for the Wave. Morgan scored two touchdowns and made a 24-yard field goal in the comeback victory over Auburn.

The winner of this contest will advance to the Regional Semifinals and play the winner of Parry McCluer and Bath County.