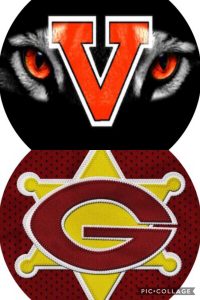 The lone Saturday game in the opening round of the Class 2, Region D playoffs features a Week 8 rematch between the Graham G-Men (9-1) and the Virginia High Bearcats (5-5).

The first contest between the two teams back in October, saw Cam Allen lead the G-Men to a 44-7 rout of the Bearcats. Allen tallied four total touchdowns as Graham turned in a dominate second half performance in the blowout win, after leading 16-0 at halftime.

Graham’s defense held the Bearcats to only 158 total yards of offense. All but 27 of those yards came on two long runs for VHS.

On the third play of the game, two-way standout Aaron Rose broke free into the G-Men secondary on a 58-yard run but was injured on the play and missed the rest of the game. The other long run for the Bearcats came in the second half when freshman Stevie Thomas raced for a 73-yard touchdown. Thomas finished the game with 76 yards on 17 carries.

This week’s matchup should feature the same stars from each team that stood out in week eight.

Graham’s head coach Tony Palmer will lead his star-studded group of G-Men into Saturday’s contest in an attempt to get over the hump of not being able to advance past the regional championship game in each of the last two seasons. Graham features playmakers such as Allen, Devin Lester, Jazaire Reed, Chris Shinault and Nick Kastner.

Virginia High head coach Michael Crist leads his upset-minded squad into Mitchell Stadium with the intention of showing the rest of the region that the Bearcats will be a tough out in the playoffs this season. The Bearcats are led by Rose, Thomas, Colton Ratcliffe, Jamie Lathrop and in his second game back after recovering from surgery on a broken arm, senior Austin Davidson.

Graham has won nine in a row after a season opening loss to Bluefield. The G-Men are the early favorites in the Region 2D playoffs, but the Bearcats are out to replicate the success of the 2016 team from Blacksburg (led by former Bearcats offensive coordinator Thad Wells) that also finished the regular season at 5-5 and proved that the playoffs are a new season on their way to a state championship.

*SPECIAL NOTE*  Bearcat fans, you can listen to this week’s playoff game from your favorite device at spreaker.com/bearcatradio. Special start time on SATURDAY. Pregame show begins at 12:30 with kickoff at 1:00.

*Logo credits go to the Graham Twitter page and to the great James Sword.