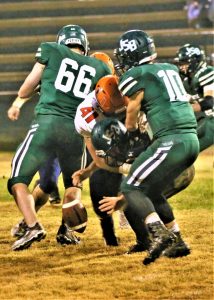 Friday marked the second consecutive week that Union took the field in a downpour, but this week’s contest ended much more favorably for the Bears. Union relied on a steady dose of Aaron Stidham and a smothering defense to shut out John Battle 12-0 to end the regular season.

It was a low scoring, defensive slugfest in muddy and rainy conditions for both squds. Union (8-2, 4-2) struck first on a 25-yard touchdown pass from Bailey Turner that found Justin Falin in the end zone to get on the board and take a 6-0 lead. That score proved to be the only scoring of the first half.

The one score would have been enough, as Battle (5-5, 3-3) struggled mightily to manufacture any offense. The combination of rainy weather, a soaked field and a motivated Bear defense saw the Trojans generate less than 200 total yards of offense. Union added another score when running back Aaron Stidham found the end zone from one yard out to make the score 12-0, which was the final.

Union leaned heavily on Stidham as bruiser Mason Polier was out nursing a leg injury and the conditions worked against speedster Avery Jenkins. The Bears struggled again moving the ball in the air aside from Turner’s touchdown pass but the defense proved too stout for Battle.

The teams may have been keeping a few tricks up their sleeves as they meet in the first round of the Region D, 2A playoffs. The second seeded Bears host the 7th seeded Trojans on Friday at Bullitt Park in Big Stone.