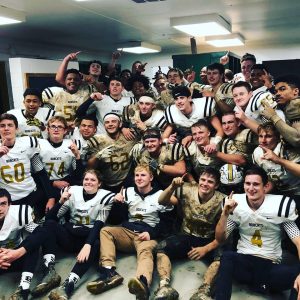 When Bradey Loader broke loose for an 80-yard touchdown on the first play of the game, it looked like Glenvar (9-1, 5-1) might blow out the Bobcats. Radford (9-1, 6-0) never gave up another score and P.J Prioleau sealed the 17-7 victory over the Highlanders on a seven yard touchdown run with 5:05 remaining. The Bobcats left Salem as the Three Rivers District champions for the first time since 2009. For the second year in a row, Glenvar suffered their first loss of the season, while playing for the title.

It was a muddy mess at Highlander Stadium. Loader, who is in the Timesland top five for rushing, did not let the field conditions slow him down. Glenvar received the opening kickoff. On the first play from their own 20-yard line, Loader received the handoff and went untouched to the end zone for the first score of the night. After a successful extra point, Glenvar led 7-0 just 13 seconds into the game.

Radford tried to answer with Prioleau picking up chunks of yards, driving the Bobcats down the Glenvar 38-yard line. Their drive stalled out so Radford punted the ball and it landed inside of the Highlander five-yard line. After a quick three-and-out, Radford got the ball back with good field position. They drove down inside the 20 but missed a 35-yard field goal. The score remained 7-0 going into the second quarter.

Both teams exchanged three-and-outs until Radford threatened to score late before half. The Bobcats drove down to the six yard line but got stuffed on fourth-and-one attempting the quarterback sneak. On their following possession they were able to put some points on the board when Conner Lytton nailed a 37-yard field goal. Glenvar led 7-3 at the break.

Radford scored 14 unanswered in the second half. Jaylin Taylor intercepted Laundry Gerbers and returned the pick 22 yards to pay dirt with 8:04 remaining. Zane Rupe and P.J Prioleau broke the Highlanders back on a option play from seven yards out which put Radford up 17-7.

Glenvar started having success moving the ball late in the fourth as they were in desperation mode. They drove down inside the Bobcat 20-yard line twice but could not come away with any points.

Radford had 187 yards of total offense with 151 yards on the ground. Prioleau, who lead in rushing for the Cats, rushed for 89 yards on 23 carries.

Both teams sit at the top of Region 2C. Radford jumped Glenvar for the top seed and will host Fort Chiswell in the Regional Quarterfinals. Glenvar dropped back to the second-seed and will host Buckingham. The Bobcats and Highlanders could possibly meet up again this post season.