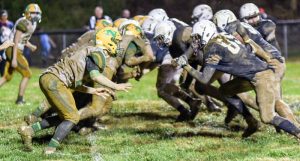 After trailing 28-6 in the second quarter, Narrows (8-2, 4-1) rallied back and scored 28 unanswered against Parry McCluer (6-4, 4-1). Down 34-28, McCluer running back Marcellius Dawson scored from one yard out with 43 seconds remaining. Jacob Wooten booted the extra point, giving the Blues a share of the Pioneer District title with a 35-34 victory over the Green Wave.

McCluer got on the board first with a 13-yard pass from Zach Claytor to Bech Garrett. The two-point conversion was no good. Narrows answered with a 34-yard touchdown pass from Wyatt Freeman to Dustin Wiley. After a missed extra point, it was tied at 6. The Blues dominated the second quarter, scoring 22 straight . Dawson scored from three yards out, then Austin Moore scored on an 81-yard punt return and 31-yard touchdown reception. Narrows scored on a three-yard plunge from Matthew Morgan. The Wave trailed 28-12 at the break.

Narrows head coach Kelly Lowe made some key halftime adjustments, as Narrows took control in the third quarter. Cole Needham returned the kickoff to start the half for 65 yards to pay dirt. Then Freeman connected with Chase Blaker from 25 yards out. Narrows was successful on both two point conversions and tied the game at 28 going into the fourth quarter. 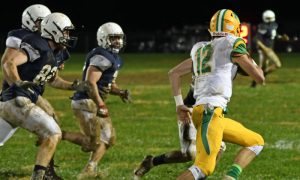 Freeman used his legs to give the Wave the go ahead score from one yard out with 5:53 remaining. Coach Lowe chose to go for two, but the Blues defense stood tough. Narrows led 34-28.

On the following drive McCluer marched 53 yards in 10 plays to regain the lead. Dawson tied the score from one yard out, then Wooten converted the extra point with 43 seconds remaining to put the Blues on top 35-34.

Narrows still had a chance, but Dawson intercepted a pass from Freeman near midfield, securing the victory. Despite the loss, Narrows still receives a share of the Pioneer District title.

Freeman completed 10-of-21 passes for 161 yards and two touchdowns, along with a rushing touchdown.