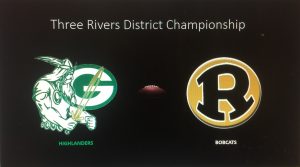 Both teams have had great success this season. Glenvar has dominated every opponent thus far, giving them a flawless record. Radford, who lost to Galax in week two, is on a seven game winning streak.

The Highlanders have multiple weapons in the backfield. While they prefer to run, they have a 6-foot-6 quarterback that can torch you through the air. Senior Landry Gerbers is 69-of-108 in passing for 1,390 yards. He also has 11 touchdowns on season while sitting in the Timesland top ten for passing yards. His go-to receivers are Justice Forster and Nick Sebolt. Forster has 25 receptions for 544 yards and three touchdowns. Sebolt has 25 receptions for 562 yards and three touchdowns.

Leading the rush attack for Glenvar is junior Bradey Loader. The 5-foot-9, 187-pound running back is fourth in the Timesland for rushing yards. He has 1,302 yards on 195 carries with 15 total touchdowns. Loader averages 144 rushing yards per game. The Spartan defense will have their hands full stopping the Highlander ground-and-pound attack behind their big offensive line. In Glenvar’s 38-6 victory over Giles, he rushed for 138 yards and three touchdowns . While Loader will be a big factor, Colby Street needs to be accounted for as well. Street, who has exploded onto the scene in the past few games, is the speedy back for the Highlanders. He has only carried the ball 35 times but he averages 11.6 yards per carry, bringing his season total to 406 rushing yards with six touchdowns. 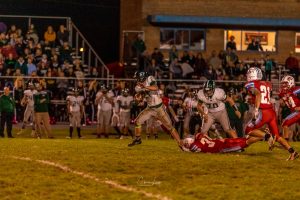 Glenvar has a stellar defense to go along with their offense. Their defense has only given up 10.6 points per game. The Highlanders have three players in the Timesland top five for defensive stats. Forster for interceptions (6), Street for total tackles (108), and the 300 pound linemen Maxx Philpott for tackles for loss (33).

Leading the Bobcats to success is sophomore running back P.J. Prioleau. P.J. is the son of former Virginia Tech defensive back Pierson Prioleau. Pierson also played twelve seasons in the NFL as a member of the New Orleans Saints. P.J. has 1,133 yards on 143 carries for the season. He is averaging 7.5 yards per carry and has twelve rushing touchdowns on the season. He also has 9 receptions for 103 yards. P.J. suffered an injury in last week’s game against Carroll County. The extent of his injury in unknown, but when asked if he would play against Glenvar, head coach Matthew Saunders stated, “We will see Friday.”

Without Prioleau Radford will lean on their quarterback Zane Rupe. Rupe is 77-of-117 for 866 yards and nine touchdowns. He can also use his legs if needed. He has rushed for 296 yards on 57 carries and six touchdowns. Trace Shepherd is the go-to receiver for the Bobcats. Shepherd has 40 receptions for 354 yards and seven touchdowns

There is a lot on the line in this game. Not only is it for the district title, but also for the top seed in Class 2, Region C. Glenvar currently sits at the top of the region followed by Radford. If Glenvar wins, they secure the top seed and will have home field advantage through the regional playoffs and Radford will likely drop back to third in the region. If the Bobcats win, they have a chance at the top spot, but will need help from other games taking place.