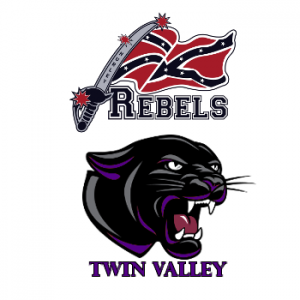 Where: Smiley Ratliff Field at The Cliff—Hurley, VA

Twin Valley:  The Panthers are coming off a bye week. They will be out for revenge after losing a heartbreaker to Rye Cove two weeks ago. Twin Valley is still playing for a playoff berth but they need to defeat the Rebels and get some help from Castlewood in order to do just that. Tylor Keen and Brandon Lester have had outstanding senior campaigns in Oakwood and they look to prolong the season with a big win over an archrival at The Cliff. The Panthers have not defeated Hurley since a one-point victory in 2013 at home. Jeremy Ward’s crew has exceeded expectations. However, compared to where the Panthers sat at one point, they have underachieved what many thought was shaping up to be the best season in school history. Keen, the senior gunslinger, will try to top his five-touchdown pass performance against Rye Cove. Twin Valley has not won at The Cliff since 2006.

Hurley: Like Twin Valley, Hurley also comes off of a bye in week 10. The Rebels have lost the past four after starting the season 3-2. Matthew Blankenship has led the offensive charge out of the Wing-T for Hurley. Taylor Justus, Chad Justice and Jonathan Hurley have all provided sparks for the gray and red this season. However, it just hasn’t seemed to fall into place all at once for the Runnin’ Rebels. Hurley definitely has a size and numbers advantage when it comes down to it in this one. They also have an edge in this series. The Rebels hold a 12-5 advantage in a series dating back to 2001. This is a big time rivalry in Buchanan County. Even with the game being moved up a night, look for there to be a big crowd at Smiley Ratliff Field. The Rebels have won four in a row in this matchup all in a rather convincing fashion. Coach Anthony Church would love nothing more than his Rebels to get a big win to build momentum going into 2019 and to completely knock Twin Valley out of the playoff picture.