The Abingdon Falcons are back on the friendly confines of Falcon Field for a home game with the Lee High Generals.  Falcon head coach Garrett Amburgey and the Falcons are riding a four game win streak that includes wins over Ridgeview and Union.  Coach Amburgey looks for his Falcons to continue their dominance on both sides of the ball as they end their regular season.  Abingdon (7-2) dominated last season’s contest, 42-0. Lee High (2-7) comes off a big loss to John Battle last week.  This game will be a district match up and has the final implications for the Mountain 7 District title.  A win by Abingdon and they will seal their unblemished district record at 6-0.  The Generals are looking for some respect within the district and a win like this could launch them into next season with some momentum.  However, this time they will face the Falcons who are peaking at the right time of the year leading up to the playoffs.  This will be a tall task for the Generals to see if they can knock off one of the big boys in the district.

The Generals wide out has five touchdown receptions this year and is part of a trio of players producing for the them.  Goins could be a threat to take the ball to the house on any given play.  He has speed and exceptional hands.  The Generals are averaging a little over 18 points a game.  Look for Goins to leave it all on the field Friday. 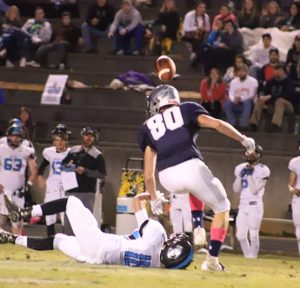 Senior Holt Dotson looks to get back on track with his receiving yards and scores.  He is certainly one of the many threats QB Gabe Booth looks for on the passing game.  Dotson has gain quite a bit of notoriety since being featured for “The Catch” again Ridgeview a few weeks ago.  It was featured on NBC Sunday Night Football, ESPN Sports Center and went viral on social media.  The leading receiver for the Falcons is a threat all over the field.  He isn’t afraid to go across the middle and is one of the Falcons deep threats.  Dotson has 24 receptions for 538 yards and five touchdowns on the year.  His long for the season is 75 yards.

Avoid the big plays- Abingdon has shown it has big play ability and the Generals need to avoid allowing the Falcons to strike quick and often.

Shorten the game- The Generals will need to limit the number of offensive plays the Falcons have.  Abingdon can strike quick and often if given the chance to score.  The best defense for Lee High will be long sustained drives by their offense.

Turnover Battle-  Abingdon must win the turnover battle to get their offense rolling and give them extra opportunities to score.  If the defense can create turnovers, Boothe and Co. should be able to put up some big plays.