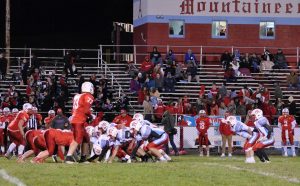 The Spartans finished the regular season strong with a 42-20 victory over the Mountaineers. Giles (5-5, 3-3) jumped out to a 20-6 lead at halftime. Dominic Collini scored from 29 yards out and another score from 11 yards out. Logan Greenway added the third score in the first half from four yards out.

Early in the third quarter, Alleghany (0-9, 0-5) closed the gap, faking out the Spartan defense on an option play. Giles answered on a 28-yard touchdown pass from Chaston Ratcliffe to Chase Fleeman to extend the lead 28-12. Near the end of third the Mountaineers got another score, using their ground-and-pound offense, bringing the score within eight points after a successful two-point conversion.

The Spartans pulled away in the fourth quarter. Fleeman scored on a reverse play from 22 yards out then Ratcliffe scored from two yards out, securing the win for Giles.

This has been a roller-coaster season for the Spartans. 2010 was the last time Giles finished the regular season with less than seven wins. The Spartans had to overcome many obstacles this season. There was a low turnout of athletes, several season ending injuries, and the struggles of having an inexperienced team. While a 5-5 season may be disappointing to the Spartan faithful and shocking to the western part of Virginia, their schedule was no cake walk. Giles lost to five teams that currently have a combined record of 41-4. Two of those teams, Blacksburg(4A) and Glenvar(2A), are undefeated and favored to represent the western part of their division for the state title.

Despite going .500 on the season, Giles clinched the sixth seed in Region 2C, giving them the opportunity to play in the post season. Unfortunately for the Spartans, they will not host any playoff games this season for the first time in eight years.

Where will Giles have to travel in the first round? That answer is unclear as this is the final week of regular season play. There are multiple games on Friday that could change the playoff seedings. The Spartans may travel to Radford for a rematch or Appomattox for the third year in a row. If James River loses to Carroll, Giles may move up to the fifth spot and end up playing at Gretna. The playoff picture will clear up after this week’s games.

As for the Alleghany Mountaineers, they will play their final game of the season at Floyd, in hopes of getting their first win to conclude the season.