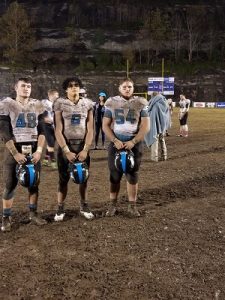 Alijah Sproles (48), Trenton Adkins (6) and Brayden Mullins (54) had a fun night at the office against Pike County Central

The Ridgeview Wolfpack looked to get back on track Friday night against interstate opponent Pike County Central.  On a chilly, rainy and muddy October evening in Pikeville, Kentucky the Pack had no trouble with the Hawks in a resounding 47-14 victory at the Hawk’s Nest.

The Wolfpack did not take long to make their presence known in the contest.  11 seconds after the contest began, the Pack were on the board courtesy of a Matthew Sexton 64-yard sprint right up the gut.  Joe Meggison’s extra point was true and the Pack had an early 7-0 advantage.

The tricky weather conditions led to the Hawks mishandling the long snap on a punt on the ensuing possession.  The Hawks’ punter helplessly had no time to get the punt off and was tackled at the 18 yard line.  Two plays later, the Wolfpack were on the board again.  This time, Sexton was on the receiving end of a Tyler O’Quin 15-yard swing pass.  Sexton’s second touchdown of the evening saw the Wolfpack take a 14-0 lead with 7:06 left in the first.

The Hawks appeared to score on their next possession, however a 78-yard run was wiped off the board due to a holding call.  The Hawks were forced to punt, and the Pack scored their third touchdown of the opening frame on an O’Quin to Timmy Hess 33-yard strike.  Meggison’s try was off the mark.  With 28 seconds left in the first, the Pack were well in control 20-0.

The Hawks were able to exploit the Wolfpack’s pass defense hindered by the muddy conditions on the next possession.  Quarterback Tyler Hunt found Austin Morrow for a 62-yard pass and the Hawks were on the board.  Isaac Hunt’s extra point was no good.  At the 10:51 mark of the second quarter, the Hawks were within two scores at 20-6.

The Wolfpack quickly answered the Hawks score as Trenton Adkins raced 59 yards to the crib 44 seconds later.  The extra point put the Pack back up by 21 at 27-6 with 10:04 left in the first half.

The ensuing Hawks drive came to a crashing halt as a fumble was recovered by the Wolfpack at the 40 yard line.  McKenzie Sproles capped off another Wolfpack scoring drive, scoring on a one yard plunge on fourth and goal.  With 5:12 left in the half, the Wolfpack stretched the lead to 33-6.  The Wolfpack forced another turnover on the next Hawks possession as Jacob Hensley snatched a Tyler Hunt pass out of the air.  The Pack and the Hawks would go to the locker rooms with Ridgeview firmly in control.

Tyler Hunt would once again hit the friendly skies midway through the third quarter finding Seth Fergusion wide open.  Fergusion raced 55 yards down the home team sideline and score.  Isaac Hunt would score the two point try, making the Wolfpack advantage 33-14 with 6:40 left in the quarter.

Less than two minutes later, Sexton once again found open muddy field.  Sexton raced away from the Hawks defense, claiming the hat trick on a 67-yard touchdown gallop.  With 4:43 left in the third, the Wolfpack extended the lead to 40-14. 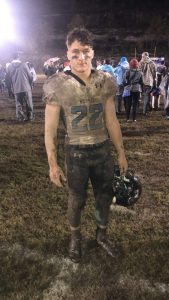 Things began to get chippy in the Hawk’s Nest as multiple personal fouls and unsportsmanlike contests were assessed to both teams on the next Wolfpack possession.  Hawks linebacker Tanner Hunt was ejected from the contest after picking up his second unsportsmanlike conduct foul, which means Hunt is also ineligible to play against Lexington Catholic in the first round of the KHSAA playoffs.

The Wolfpack would put a final exclamation point on the contest as Trenton Adkins scored his second touchdown of the night on a 59-yard run.  With 58 seconds remaining in the third quarter, the Wolfpack held a 47-14 lead.  Neither team would score for the remainder of the contest as both teams gave backups time to shine on the chilly, moist evening. 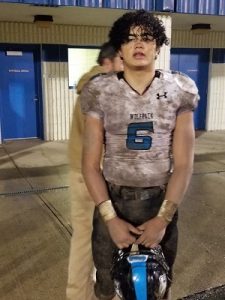 Leading the way for the Hawks on offense was quarterback Tyler Hunt who was 6-of-8 with two touchdowns, one interception and 160 yards passing with 65 yards on 11 carries on the ground.  Austin Morrow had four catches for 95 yards and one score.  Seth Fergusion had one catch for 60 yards and one score.  Nate Roberts supplemented the Hawks defense with 10 total tackles.

Matthew Sexton was outstanding on offense with seven carries for 126 yards with two touchdowns, also adding 19 yards on two catches with another score.  Trenton Adkins and Tyler O’Quin also had stellar performances, supplying two touchdowns each through the ground and air respectively.

The win for the Wolfpack coupled with Union’s loss to Abingdon sets the Wolfpack up to take control of their own destiny in capturing the top seed for the Region 2D playoffs.  The Wolfpack will look to do just that on Friday at Fuller Field against Honaker.  The Hawks finish the regular season at 3-7 and have a long road trip to Lexington, Kentucky to face Lexington Catholic in the first round of the KHSAA playoffs.