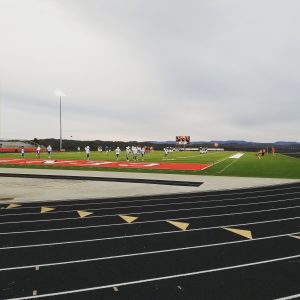 The Gate City Blue Devils and Wise Central Warriors came into Thursday night’s Mountain 7 district contest with similar agendas.  The Blue Devils wanted to close out a disappointing season with a victory.  The Warriors needed a victory desperately to stay in contention for a playoff spot in Region 2D.  Central came from two scores behind to defeat the Devils by the tally of 22-21 in an overtime thriller at Central Warrior Stadium on Thursday night.

The Warriors had the first opportunity of the contest to get on the board behind the running of C.J. Crabtree.  However, the drive stalled at the Devils 10 yard line and a 27-yard field goal by Payton Rogers was pushed wide to the right.

The Devils capitalized on the ensuing possession, driving down the field and Logan Tomlinson capping off the drive with a 16-yard touchdown run.  At the 2:22 mark of the first quarter, the Devils built an early 7-0 advantage.

On the next possession, the Warriors moved the ball out to their own 42-yard line, before facing a fourth and seven.  Coach Luke Owens decided to go for it and Crabtree was stopped well short on the carry.  The Devils would make the Warriors pay two plays later as Landon Blanton raced down the home sideline 36 yards to the house.  At the 10 minute mark of the second quarter, the Blue Devils were up two scores at 14-0.  Neither team moved the ball for the remainder of the half and the score remained a two touchdown advantage for Gate City heading to the locker room.

The Warriors were able to get on the board in the third quarter as a long drive was finished off by Matthew Boggs on a one yard carry.  The Warriors would go for two on the try and Ethan Mullins completed the pass to Daemai Lester for the successful attempt.  At the 8:11 mark of the third quarter, the Warriors had clawed to within six of the Devils at 14-8.

The Warriors made things even more interesting on the first play of the fourth quarter.  On a fourth and goal from the one, Ethan Mullins scored on the quarterback sneak over the top.  The extra point try was blocked, however, and at the 11:57 mark in regulation, the Warriors and Devils were deadlocked at 14 all.

The Devils would sustain a long drive that appeared to be capped off by a Jon Sallee touchdown pass to Luke Reed.  Unfortunately for the Devils, Sallee was flagged for illegal forward pass after being past the line of scrimmage.  The Devils would have to settle for a 29-yard field goal attempt that sailed wide right off the boot of Luke Stokes.  The Warriors would break a long run off tackle down the visitors sideline two plays later.  However, a Gate City defender was able to chase down the Warrior ball handler and strip the ball from behind.  The pigskin was recovered in the end zone by the Devils for a touchback.  With no serious offensive threat down the stretch for either team, at the end of 48 minutes, the scoreboard still read Blue Devils 14, Warriors 14.

It would take the Devils two plays to score in overtime on their possession, as Landon Blanton scored his second of the night from three yards away.  Coach Chris Akers opted for the extra point and the try was successful, giving the Devils a 21-14 lead.  The Warriors answered right back two plays later as Crabtree scored on a sweep around the home sideline from four yards out.  With the kicking game having failed the Warriors earlier in the contest, coach Owens decided to go for the victory.  Owens dialed up the same play that scored the touchdown and once again it was successful as Crabtree raced around the end and scored the game winning two point conversion.

Crabtree was the star for the evening for the Warriors rushing for 131 yards, one touchdown and the game winning two-point conversion.  Landon Blanton had an exceptional game in defeat, scoring two touchdowns on 88 yards rushing.  The loss for Gate City ends their football season with a 1-9 record.  Wise Central stands at 3-6 with the victory and is very much alive in the Region 2D playoff picture.  The Warriors host a critical showdown to close out the regular season against the Grundy Golden Wave this Friday.