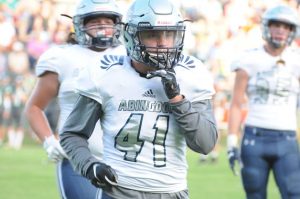 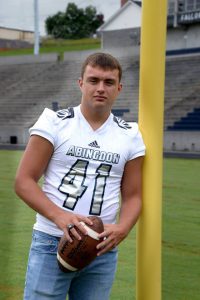 Abingdon Falcons’ linebacker William Seymore is back to full strength for his senior season. Seymore came back off season ending ACL surgery during his junior year.

That means he wasn’t on the field last season last year as the Falcons made their run at the Region 3D playoffs.  He was limited to watching from the sidelines as Abingdon fell to Northside in round one, 7-0.

Seymore went to work and rehabbed all off season to make it back on the field this fall. The senior finished the game against Ridgeview with nine tackles, three tackles-for-loss and a fumble recovery, helping the Falcons defense hold the Wolfpack to just 174 total yards of offense in a 36-30 overtime victory.

“This award means a lot to me,” said Seymore. “I’m honored, not just for me but for my team and community. I couldn’t have won this award without my coaches, teammates and our fans.” 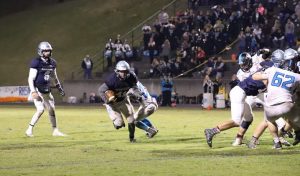 Last year’s loss to Ridgeview left a bad taste in Seymore’s mouth because he didn’t play in the game. The defeat has been on the senior’s calendar for a year.  He has watched the film.  He has wondered, “what if”.  He has also dedicated himself to his team’s brotherhood.

“I didn’t play in this game last year because of injury,” said the senior linebacker.
“Although I did not play,  I have thought about and how much I wanted to be out there to help my teammates.  I’m glad this year I got the chance to help them get the victory.”

Seymore committed himself to preparing for this game during the bye week. The senior credited film study for preparing him and his teammates for such a dominating effort.

“I know they are good, They beat Union, but I haven’t been on the field with them” said Seymore. “Being on the field with a team in previous years really helps in being able to know what an offense like to do and how to stop them.”

After the coaching change before two-a-days, the ever-improving senior linebacker has shown all season that he is one of the better defensive players in the area.  He has moved from free safety to linebacker and certainly excels in that position.  When asked about the move.

“I always felt like I was more suited to play linebacker,” said Seymore. “Coach Nutter has made some great adjustments to our defense this year.  Moving TJ Taylor to safety and bringing me to linebacker has been huge for us.” 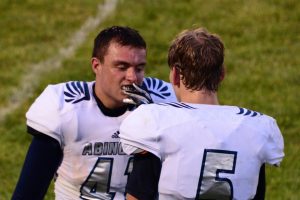 That attitude of selfless play has helped Seymore become a better leader, player and Abingdon a better team.

The Falcons & the senior linebacker aren’t resting on their laurels.

“I always want to do my best to help the team,” said Seymore. “We’re not individuals in our defense, we are a unit and we play for each other every down, we still have work to do and we will stay after it.” 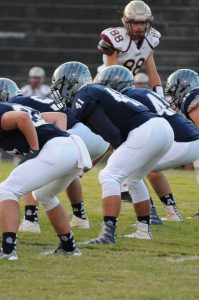 Seymore also stated he was excited about the coming game with Union and wanted to finish the season strong going into the playoffs.