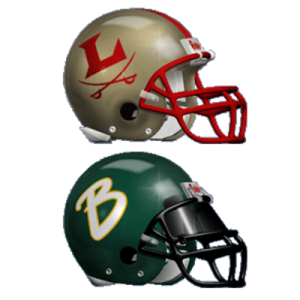 Since 1989, these two have met 17 times. John Battle won last season’s matchup 40-28. Lee High leads the overall series, 13-3. Lee High won the first 12 straight match-ups but the Trojans have won the last two.  This year, Lee High is coming in 2-6 on the season, 0-4  in the Mountain District , while the Trojans are 4-4 on the season, 2-2 in the Mountain District. A win in by the Trojans, could strengthen their chances of a regional playoff berth.  A loss by Lee would almost certainly knock the Generals out of the playoffs.

Lee High is led by head coach Jeremy Pendergraft. He is in third year at Lee High, with a record of 13-16. The Generals are led by trio on offense, QB Dwayne Garrett, RB Blake Lewis and WR Devin Goins. Garrett has seven touchdown passes, Lewis has nine rushing touchdowns and Goins has five touchdown receptions this year. Lee High is averaging a little under 18 points a game on offense, while the defense is allowing 32 points per game game.

Turnovers have been a problem for the Generals, as they are currently -5 in the turnover margin for the year.

John Battle is led by head coach Britt Stone. He is in his fourth year with a record of 16-21. The offense and defense has been mirror-like as the Trojans are averaging 20 points a game while their defense is giving up 20 points a game.

Dylan Cunningham and Juddy Shaffer have paced the running attack of the Trojans combining for 13 rushing touchdowns. Walker Osborne has been accurate from his signal-caller position. Placekicker Jayden Farly has also proved to be a weapon for the Trojans.

The Battle defense is being led by Tyler McCloud, Seth Scarbrough, Bryson Denton and Dakota Worley.  They have combined to pitch two shutouts on the year (Lebanon and Wise Central).

Last year, the Trojans defeated the Lee High Generals, 40-28 in Ben Hur, Va, to clinch a playoff spot. In that game, the now graduated Lane Scarbrough accounted for four scores. The Trojans raced to a 33-14 lead, and held off a late Lee High General charge. Mikey Statti, the Diesel, Tanner Jones and Jarrett Pool also scored for the Trojans.

Last week, the Trojans made history, when they defeated  Gate City, 26-21, at Legion Field, in Gate City. It was the first time Battle had beaten Gate City in back-to-back years. The Trojans were down 14-0, with nine minutes to go, in the first quarter. Zane Poe added a Huge Spark to the comeback, with a 75 yard Kick-off Return for a TD. Jayden Farley added two field goals, including a 39-yard FG.  Walker Osborne to Turner Lyons for a 36-yard touchdown was the game winner.

Lee High lost their last game in a heartbreaker to the Wise Central Warriors, 27-21. QB Dwayne Garrett had two touchdown passes and Devin Goins had 124 yards receiving on four catches in the loss.

The game has been moved to Thursday due to weather concerns.