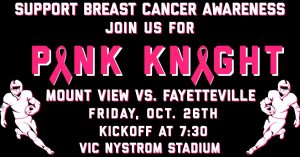 Mount View:
The Mount View Golden Knights are now 7-1 after dropping their first game of the year in dramatic fashion to the Pikeview Panthers. The Golden Knights, who have been ranked #1 in the 1A WVSSAC rankings for the entire season, have dropped to the #2 spot behind Wheeling Central. Coach Larry Thompson’s team faced adversity in their matchup last Friday at Pikeview when they found themselves being without the services of their senior leader Elijah Barner, who was held out with a leg injury. Players such as Jesse Rose, Terry Headen, Ty Powell, Micah McLaughlin and Marqus Ray stepped up in Barner’s absence, but it wasn’t enough to stop Evan Rose & the Panthers from pulling the upset. Jesse Rose threw for 211 yards and two touchdown passes, one to Jasauni Saunders and the other to Ray. Ray finished with five catches for 142 yards. Powell led the Knights with 142 yards on the ground and a score. Headen finished with 55 yards and a rushing touchdown. McLauglin was once again a force on defense, finishing with 11 tackles.

Fayetteville:
Fayetteville jumped out to a 5-2 record before their annual meetup against rival Midland Trail, in what is referred to in Fayette County as “The Battle for the Bridge.” Fayetteville, who is in their last year of existence before consolidation, dropped the last rivalry game to the 8-0 Patriots by a score of 26-10. The Pirates held a 10-6 lead in that game at the half, led by a touchdown run by their star tailback Jordan Dempsey and a 22-yard field goal from WonYoung Hwang. Dempsey, who has been clocked in the 40 yard dash at 4.45, finished with 56 yards on the ground, which is well below his usual average. The Pirates quarterback Logan Frantz completed passes to Blake Underwood and Sammy Pullens. Pullens also added 41 yards on the ground for Coach Dave Moneypenny’s team. 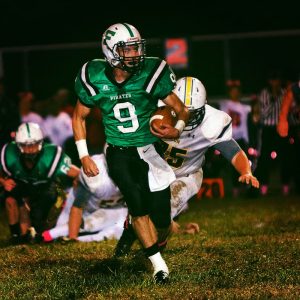 The Golden Knight’s will be having a breast cancer awareness night on Friday.