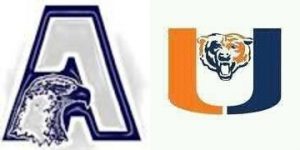 Week 10 brings a matchup that will decide the Mountain 7 district title. The Abingdon Falcons, flying high after notching a huge conference win over Ridgeview, can clinch at least a share of the M7 crown. If Abingdon wins out, they claim the outright M7 crown. Union, coming off their open date, can muddle the district picture with a win. If the Bears win out, they clinch a share of the district and three teams can claim shares of the M7 title.

Playoff implications abound as well, with the Bears possibly claiming the top seed in 2A Region D and home field leading up to a region championship game. A loss drops Union anywhere from second to fourth. Abingdon is firmly entrenched in the 3A standings and will finish with a top four seed and at least one home playoff game with a win Friday and a win over Lee High.

Abingdon scored their biggest win of the season last week, upsetting the M7-leading and 2A top seed Ridgeview in a thrilling overtime affair. The Falcons jumped out to an early lead at home and took a 14-10 lead into the break. The Wolfpack did not simply lie down and roll over. The visiting team scored 14 points in the third quarter to snatch the lead heading into the final stanza, but the Falcons would not go away. The offense moved Abingdon into position, down three points, and junior kicker Graham Griffith sent the game into overtime with 15 seconds left. Ridgeview missed a field goal attempt on the first overtime possession and the Falcons seized the opportunity on a 23-yard touchdown run from William Seymore to win the game. Union was off last week and comes into this contest now knowing this contest is now a de facto conference title game.

Union will have a huge advantage Friday. The Bears play host in this game, and Bullitt Park has not been a friendly venue for opposing teams. Union has not lost a regular season game at home since 2012 and is 19-1 in their last 20 home games, the lone blemish was a playoff semi final loss to eventual champion Appomattox last season.

Abingdon will come into the game confident they can hand the Bears a second M7 loss. A balanced offensive attack and a two headed running back duo have allowed the Falcons to average 30 points per game. Senior signal caller Gabe Boothe is a steady hand for first year coach Garrett Amburgey’s offense and allows Abingdon to punish teams for stacking the box. But if teams don’t stack the box, they are in for a long night trying to corral the Falcons dynamic duo of runners. Sophomore Martin Lucas, who had over 100 yards rushing last week, has speed rarely seen and does not go down on first contact. Senior William Seymore is the second runner in Abingdon’s run first attack and Lucas’ backfield mate. The Falcons churn out rushing yards behind a big and powerful offensive line. On defense, Seymore plays inside linebacker and is all over the field. Abingdon knows it must slow down the powerful Union running game and feels confident they have the horses to do so.

The Bears still rely on their power run game to eat up yardage and time of possession, but recent weeks have seen coach Travis Turner open up the offense. Senior quarterback Bailey Turner is a steady hand under center and has shown he is more than capable of airing out the ball. Union is still a run first team, using three different backs to keep the opposing defense on their toes. Avery Jenkins is the speedster of the group, showing off his elite track speed early and often. Jenkins averages close to 100 yards per game on the ground and is dangerous as a runner and a receiver. Junior Mason Polier is the punishing fullback who is more athletic than given credit for while Aaron Stidham is the do it all back of the bunch. The Union defense is still one of the best units in the area, smothering opponents in the run game while getting after the quarterback in passing situations.

The winner of the game is going to be the team that wins at the line of scrimmage. If the visiting Falcons can get push on the offensive line and allow their backs into the open field, that will allow Boothe to have open passing lanes and time to throw the ball. Union plays better from the lead, so coming out quick and setting the tone early will be point one on the agenda for the Bears. The teams are too evenly matched to absorb many mistakes so both teams must limit the penalties and not give away possessions by turning the ball over.

This could be a game for the ages. Both teams have playoff ambitions and this contest will go a long way in seeding in the postseason while giving the winner momentum.