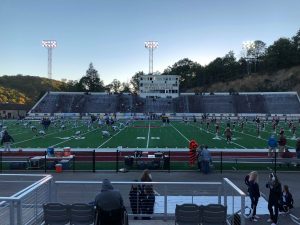 Graham and Richlands have played football since 1926.

Thursday night’s 45-0 win over the Blues was the largest win ever in the series for the G-Men.

Let that sink in.

It all started with Cam Allen, who may have solidified his spot as the top player in Region D of Class 2.

Allen finished his night 9-of-19 for 192 yards and two touchdowns while adding 137 yards on 10 carries for two additional touchdowns.

Graham scored early and often, putting at least a touchdown on the board in all four quarters of the game.

The normally poised Race Moir had a dreadful night, completing just 5 of his 17 attempts for 38 yards and four interceptions.

Graham put Southwest Virginia on notice Thursday night, and maybe even the state.

While Graham will remember this one for a long time to come, Richlands will look to forget this result and get back to work on Friday.