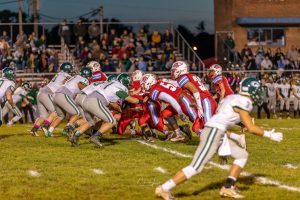 It was a tough night for ten Spartan seniors. Not only did they play their last game at Stephen C. Ragsdale Field, but they fell to their district rivals, Glenvar (9-0, 5-0). The Highlander offense started wearing Giles (4-5, 2-3) down in the second quarter, and they showed that their defense is as good as advertised, leaving Pearisburg with a 38-6 victory.

Much of first quarter consisted of three-and-outs for both teams, and it appeared that this game would be a defensive battle. It was not until late in the first, when you could see the Spartan defense wearing down. After Giles turned it over on downs at the Glenvar 35-yard line, the Highlanders got in rhythm and used their momentum to drive them down the field. From one yard out, Colby Street plowed into the end zone for the first score of the night. Glenvar led 7-0 with 56 seconds remaining in the first.

The Highlanders pulled away in the second quarter. First it was Bradey Loader who carried it around the left side, bouncing off tacklers then sprinting into the end zone for 71 yards. Then late in half after driving down to the Spartan 18 yard-line, Kaid Furman kicked it through the uprights, extending the lead to 17-0 at the break. 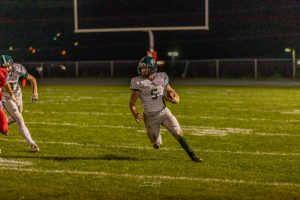 The Spartans continued to struggle with getting the single wing moving. Glenvar defensive lineman Maxx Philpott and linebacker Colby Street was in the backfield all night causing issues for Giles. Philpott finished the game with eight total tackles. Five of those were for a loss along with one sack. Street led in tackles with 18 total. The Spartans only score of the night came on a 99 yard kickoff return from James Lyles late in the third. 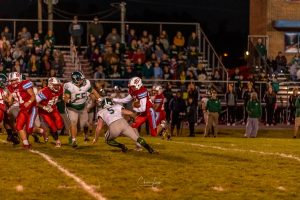 Loader added two more scores for the Highlanders in the second half. One from five yards out and another from 41 yards out with two minutes remaining in the game. Quarterback Landry Gerbers connected with Justice Forester for a 52-yard touchdown late in the third. Gerbers finished the night 6-of-16 for 151 yards with one touchdown and one interception.

Giles had 208 total yards of offense with 155 on the ground and 53 through the air. Hunter Williams led the Spartans with 58 yards rushing on nine carries. Logan Greenway added 48 yards on 16 carries. Chaston Ratcliffe completed 2-of-6 passes for 53 yards.

Glenvar has a bye week before facing the Radford Bobcats in what should be the Three Rivers District championship. Giles travels to Alleghany on Friday to wrap up the regular season.