The first forty-eight minutes on Friday night were as exciting as any game in Southwest Virginia.  This game could be considered an instant classic as it came down to each teams possession in overtime.

When the dust settled, the home-standing Falcons had more to cheer about at the final whistle, as Abingdon (6-2) pulled out the 36-30 victory over Ridgeview (7-1) on William Seymore’s 23-yard touchdown run.

The Wolfpack took the early 3-0 lead on Joe Meggison’s field goal.  Abingdon then then reeled off 14 points behind their powerful offensive line and the ground game to take the lead 14-3.

Running back Martin Lucas reeled off 136 yards on the ground in the first half. Gabe Boothe threw for 174 yards and two touchdowns on the night.

Running back Trenton Adkins, was held in check by a stingy Falcon defense, only allowing him 56 yards rushing in the first half. 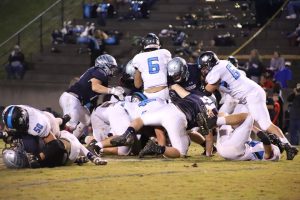 The game changed gears when Ridgeview used an 91-yard kickoff return for a touchdown from Jacob Hensley to close the gap to 14-10 at the half.

After the half, the Falcons struck first on Gabe Boothe’s one yard dive in the endzone to extend the lead to 20-10.

Ridgeview came roaring back in the third quarter with 20 unanswered points to regain the lead at 30-20 behind Tyler O’Quin’s arm and Trenton Adkins running.  Abingdon would answer back on William Seymore’s late touchdown to make it 30-27 Ridgeview.  With only 15 seconds left Abingdon’s Graham Griffith would tie the game at 30 a piece to send the game to overtime.  Ridgeview came up short on a 36 yard FG attempt in their initial possession of OT.  This opened the door for the Falcons to have a shot to win.  After Seymore’s initial score was called back by a penalty.  he was not to be denied and scored on the next play from 23 yards out to seal the victory for the Falcons.

Defensively, the Falcons shut down their opponents offensive output for the second straight game.  Only allowing 95 yards rushing, 78 yards passing, and limiting the Wolfpack to 47 total offensive plays. 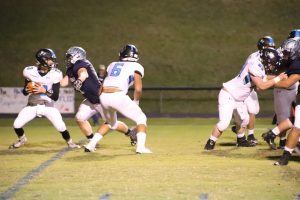 The Abingdon offense reeled off 420 total yards of offense that included 256 yards rushing and 164 yards passing.

One highlight from the night that has garnered national attention was Holt Dotson’s 75-yard wild off the head catch and run down to the one yard line.  the highlight has been on SportsCenter and NBC’s Sunday Night Football’s halftime show. 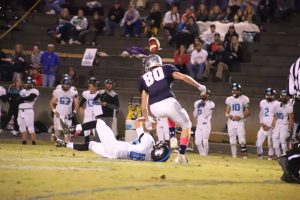 William Seymore had himself a game, racking up eight tackles including three tackles for loss and a fumble recovery. Offensively, William provided a second half spark with 14 carries for 98 yards including the game winning 23-yard touchdown in overtime. 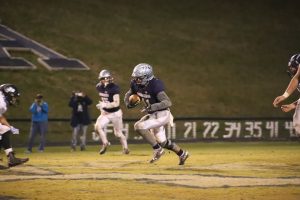 Abingdon now heads over to Bullitt Park to take on the Union Bears for the outright Mountain 7 district title. The Falcons-Bears will be in the spotlight this week with WCYB broadcasting their game live on the CW channel.

Kickoff is set for 7 p.m. inside Bullitt Park on Friday night.