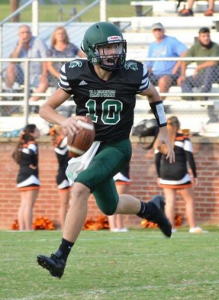 The Eastside Spartans started the 2018 season with a string of bad luck. In his first year as head coach, Michael Rhodes and his team started out 1-4 with all five games coming down to the wire. If the ball bounced a different way a few times, the Spartans could have very well been 5-0.

Pro Football Hall of Fame coach Don Shula once said, “Sure, luck means a lot in football. Not having a good quarterback is bad luck.”

While the luck was bad for the Spartans, the quarterback was not. Despite the losses, Jordan Rasnick asserted himself as one of the area’s top signal callers. In week seven, Rasnick accounted for four touchdowns in the Spartans 47-6 win vs. Rye Cove and in week eight he passed for 212 yards and four scores in Eastside’s 51-16 win over Twin Springs.

The latter performance was enough to earn the senior quarterback the Coalfield Sports’ Week 8 Offensive Player of the Week.

“It means a lot to be named player of the week,” said Rasnick. “That just shows that the whole team is doing their job. The
line is blocking and recievers are catching. All credit goes to God he has blessed me with a great team and great coaches.” 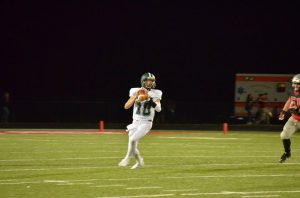 While Rasnick has put up impressive stats all season, he was especially impressive in the win over Twin Springs. In that game the Spartans jumped out to a quick lead and never looked back.

“We played with a fast tempo,” said the 6-foot-2, 180-pound senior. “We planned to score fast and execute what we had went over all week during practice.”

That’s easy to do when you have a supporting cast like Rasnick. Against Rye Cove, receiver Nick Livingston caught two touchdown passes, while Will Stansberry and Garrett Whited hauled in one apiece. Whited also finished with 112 rushing yards.

“I give credit to my great wide receivers running their routes and getting open,” said Rasnick. “We have a great offensive coordinator that comes up with clever routes to surprise teams with.”

After starting 1-4 it would have been easy to pack it in for the season, but under the leadership of Rasnick, the Spartans turned around their luck. Rasnick and his supporting cast hope to finish the season strong and grab one of the last seeds in the 1A Region D playoffs.

“It’s awesome just to see the fire inside these guys,” said Rasnick. “They never give up on me they fight until the last second.”