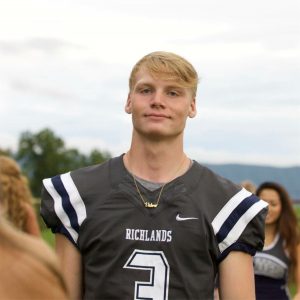 Richlands’ linebacker Sean Toney took a break from football in his junior season.

That means he wasn’t on the field last season in Marion when Austin Wyatt fired a 52-yard touchdown pass to Easton Medley in the final minutes to give the Scarlet Hurricane a 22-18 victory over the Blue Tornado.

Toney decided to strap on the pads for his senior year. Against Marion on a chilly homecoming night, he made his presence felt. Toney finished the game with 13 tackles and two sacks, helping the Richlands’ defense hold Marion to just six points in the Blues’ 30-6 victory.

That impressive defensive performance led Toney to be named CoalfieldSports.com Week 8 Defensive Player of the Week.

“This award means a lot to me,” said Toney. “I’m honored to be acknowledged for my talents and hope to be recognized more as a talented athlete. I couldn’t have won this award without my friends and family for voting for me.”

Last year’s loss to Marion was the first in 16 years for Greg Mance’s Blue Tornado. The defeat was significant as it gave Richlands their first five loss regular season in the 21st century. Although Toney wasn’t a part of that loss, he fully understood the importance of coming away with a win over Marion in 2018.

“I took last year off to focus on my grades,” said the senior linebacker.
“Although I did not lose to them last year personally, I could feel the tension from my teammates and understood how important it was to win that game.”

Toney took it upon himself to have a performance reminiscent of former Blues’ standouts Bryce Wade or Shane Wicks. The senior credited film study for preparing him and his teammates for such a dominating effort.

“Marion played really well, but we were prepared after watching film after practice together,” said Toney. “Being able to visualize their plays really helped in being able to know where the ball handler would be and how to stop him.”

After taking a year off there doesn’t seem to be much rust for Toney. The ever-improving senior linebacker has shown all season that he is one of the better defensive players in the area.

“Overall, I recognize a lot of mistakes that I have made in games,” said Toney. “My coaches have helped me correct them and better myself as an athlete. I just strive to do better each game.”

That attitude is what has helped Toney become a better player and Richlands a better team.

But the Blues & Toney aren’t satisfied yet.

“My goals are to always do my best,” said Toney. “We’re not satisfied with anything less than giving 100% on the field. Richlands wants to show people what we are capable of.”