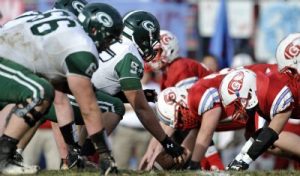 Since 2011, the Three Rivers District champion has either been Giles or Glenvar.

Giles had won 20 straight against Glenvar before falling to them in the 2014 playoffs. It was at that time the two turned into district rivals. The Highlanders went on a four game winning streak against the Spartans before Giles pulled off the upset last season in Salem, giving Glenvar their first loss.

While the Spartans have been perrenial contenders for decades, the Highlanders have made themselves known across the region more recently. Since 2014, when Glenvar won the first state title in school history, they have compiled an  an impressive 54-7 record.

Glenvar (8-0, 4-0) has displayed pure dominance again this season. Not only do they have a flawless record, but they also have a comfortable lead in power point ratings for region 2C. How did they climb to the top of the region in a convincing fashion? They did so by defeating quality teams like Galax, Grayson and James River who combine to only have one loss on the season, not counting their defeat to Glenvar.

The Highlanders have multiple weapons in the backfield. While they prefer to run, they have a 6’6, 235lb quarterback that can torch you through the air. Senior Landry Gerbers is 57 of 82 in passing for 1,175 yards. He also has 10 touchdowns on season while sitting in the Timesland top five for passing yards. His go-to receivers are Justice Forster and Nick Sebolt. Forster has 19 receptions for 421 yards and two touchdowns. Sebolt has 19 receptions for 470 yards and three touchdowns.

Leading the rush attack for Glenvar in junior Bradey Loader. The 5’9, 187lb running back is third in the Timesland for rushing yards. He has 1,027 yards on 160 carries with 12 total touchdowns. Loader averages 147 rushing yards per game. The Spartan defense will have their hands full stopping the Highlander ground-and-pound attack behind their big offensive line. In last weeks 42-0 shut out against Floyd, Loader rushed for 113 yards on eight carries and had three touchdowns. While Loader will be a big factor, Colby Street needs to be accounted for as well. Street, who has exploded onto the scene in the past few games, is the speedy back for the Highlanders. He has only carried the ball 24 times but he averages 14 yards per carry, bringing his season total to 334 rushing yards with five touchdowns. He carried the ball three times for 127 yards against Floyd. 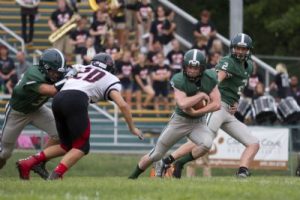 Bradey Loader has 1,027 rushing yards on the season (photo by Shawn Sprouse)

Glenvar has a stellar defense to go along with their offense. Their defense has only given up 11 points per game. The Highlanders have three players in the Timesland top five for defensive stats. Forster for interceptions(4), Street for total tackles(81), and the 300lb linemen Maxx Philpott for tackles for loss(21). Glenvar held Floyd to 111 yards of total offense.

Giles(4-4, 2-2) is coming off an important 33-13 victory against Carroll County. The Spartans currently sit fourth in the Three Rivers District and sixth in the region 2C power points. A win over the Highlanders would give Giles a significant boost in points. 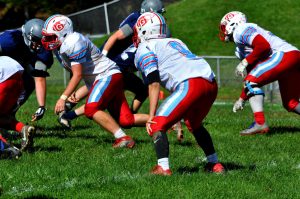 Ty Lowery leads the Spartan defense with 70 total tackles. He will have a busy night defending the Highlanders (photo by Shannon Lowery)

The Spartans have two tailbacks that have combined for 1,143 yards, two full backs that have totaled 572 yards, and a wingback that has 250 yards rushing. Tailback Logan Greenway is the rushing leader for Giles. He has 645 yards on 135 carries and three touchdowns. Chaston Ratcliffe, who alternates with Greenway, has 498 yards on 109 carries with four touchdowns. He also has three touchdowns through the air.

Fullback Hunter Williams has 305 yards on 50 carries with three touchdowns but has not played in three games due to an unknown injury. Taking over for him is Dominic Collini, who rushed for 160 yards on 13 carries against Carroll.

Beating the Highlanders will prove to be a tall task for the Spartans. They must be more disciplined than they have shown in the previous seven games, where they have turned the ball over 14 times and committed 48 penalties.

One advantage that Giles has this year is home field. Since 2011, the Spartans are 44-8 playing at Stephen C. Ragsdale field. Many say that the train horn is intimidating for visiting teams, but Glenvar is no stranger to the horn. In fact, they started using one themselves back in 2016 to counter the Spartan horn.

A plus for Giles? Since 2005, the Spartans have broken Glenvar’s undefeated streak five times.

Whoever controls the line of scrimmage, should walk off the field with a victory.