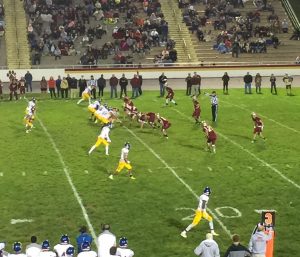 After a 21-14 halftime score, fans expected the second half to be a shootout between Blacksburg (8-0, 4-0) and Pulaski (6-2, 3-1). That is not how it played out. In fact, neither team scored a touchdown in the second half and both teams combined for only 84 total yards. The Bruins were able to hold on to the halftime lead, and left Kenneth J. Dobson Stadium with a big district win.

Cougar fans packed out the stadium, in hopes of watching their team pull off the upset and claim the top spot in the River Ridge District. While it was the coldest night of football so far this season, Pulaski came out hot and jumped on the Bruins early.

Blacksburg, who played without their best player Tiquest Terry, received the opening kickoff. On the third play of their first possession, quarterback Grant Johnston was picked off by Gage Mannon at the Cougar 37. The next play, Mannon carried the ball around the left side and sprinted 63 yards untouched to pay dirt. The Cougars jumped out to a quick 7-0 lead. On Pulaski’s next possession, they found themselves backed up close to their own end zone. After a three-and-out, Blacksburg had good field position starting near midfield. From there, running back Brian Mitchell diced the Cougar defense with a 30-yard carry followed by a 12-yard carry. He then scored from one yard out to tie the game at 7. That was the only rushing success Mitchell had, as he was held to negative yardage the rest of the game.

Following the tying touchdown, Pulaski speedster E.J. Horton took the kick off at the 10-yard line and motored his way to the end zone for a 90-yard kick return. Pulaski took the lead 14-7. That would be the last time the Cougars made it into the end zone.

As the Pulaski offense bogged down in the second quarter, the momentum shifted to the Bruins. Two big plays for Blacksburg put them back on top. First, it was a desperation throw from Johnston. Feeling pressure by the Cougar defense, Johnston looks right and let loose connecting with Thomas Coffey. Coffey plucked it out of the air and sprints into the end zone for 76 yards. It got worse for Pulaski on their next possession. With 3:00 remaining in the half, the Cougars had to punt. It appeared that the ball would roll dead, but Mitchell scooped up the bouncing ball and returned the punt 70 yards to the end zone. The Bruins led 21-14 at the break.

The second half was scoreless. Both defenses played lights out. Blacksburg only had 10 total offensive yards. Pulaski had 74 total yards in the second half but turned the ball over five times, three interceptions and two fumbles. The biggest turnover came on the Cougars last drive of the game. On a third-and-long, Kade Akers threw up a desperation pass but it was picked off. That interception sealed the victory for the Bruins.

Blacksburg finished with 186 total yards. Johnston was 15-of-26 for 169 yards with one touchdown and two interceptions.

Pulaski finished with 228 total yards. Akers was 11-of-27 for 89 yards and three interceptions. Mannon finished with 96 yards on 9 carries, only gaining 33 yards after his first score of the game.