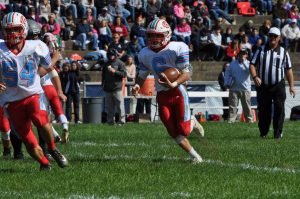 As the regular season winds down, the post season picture becomes clearer. Not often is Giles at risk of not making it into the playoffs. With a losing record near the end of the season, the Spartans knew how important a win over Carroll County would be.

Giles left Tommy Thompson Field on Saturday with a 33-13 victory over the Cavaliers to keep their post season hopes alive.

Heavy rain moved into the area mid-week, resulting in severe flooding. On Thursday, the decision was made to play the game on Saturday at Galax High School on their new turf field. Around noon on Friday, the game was moved back to Carroll County High School.

The Cavs won the toss and elected to receive the opening kick off. Head coach Jack Turner wasted no time with his ground-and-pound offense, running the ball up the gut three straight times. The Spartan defense stood their ground, forcing Carroll (2-5, 1-2) to punt the ball. Giles (4-4, 2-2) strolled down the field in single-wing fashion then wingback Chase Fleeman scored from 29 yards out on a reverse. Giles jumped out to an early 7-0 lead.

The next series of possessions had similar results. The Cavs went three-and-out and Giles marched back down the field. From 14 yards out, the Spartans caught Carroll off-guard when tailback Chaston Ratcliffe dropped back and connected with his wide open tight end, Jacoby Wilson. After a failed extra point, Giles lead 13-0 midway through the first quarter.

The Cavaliers finally got rolling late in the first. After eating up five minutes off the clock, quarterback Jacob Motley walked into the end zone from three yards out. Carroll trailed 13-7 going into the second quarter.

Fleeman put up another score for the Spartans. He went untouched for 23 yards on a reverse once again. The Cavaliers answered after chewing up six more minutes off the clock. Brandt Davidson scored from six yards out. After a blocked extra point, Giles went into halftime leading 20-13.

The Spartans dominated the second half. Logan Greenway scored from twelve yards out and Dominic Collini scored from one yard out, extending the lead to 33-13. The Cavalier offense only crossed mid-field one time. Giles finished with 355 yards of total offense.