The Abingdon Falcons are on their long anticipated bye week this week.  No game scheduled for Friday comes at an opportune time for the Falcons and head coach Garrett Amburgey.  It’s a time for the team to heal some nagging injuries and hopefully get some players back.  Coach Amburgey and his staff will also be afforded the chance to go scout some upcoming opponents in person this week.

The next few weeks are going to be some tough sledding for the Falcons as they enter the meat of their schedule with Ridgeview, Union and Lee respectively.  Abingdon took care of the first piece of the puzzle in their win against the Bearcats in the second half of the 2018 season.  Now is the time to kick things into another gear and ramp up for the playoffs.

On Monday the Abingdon Falcon golf team hit the links at Williamsburg National Golf Club for the 3A state tournament.  At the end of the day, Abingdon had clinched the state championship for the second year in a row.  This is their third state title in the last four years.

The Falcons were led by Connor Creasy’s two under 70, to clinch the title.  Creasy, who is a Wake Forest commit, has been the driving force for the Falcons the past two seasons and brought home the back-to-back individual gold medal.  Will Watson (79,) Bryce Addison (80) and George Green (81) scored close enough together to make tough on the rest of the field to overtake them.  Abingdon finished the day with a team score of 310 which was enough to eclipse Hidden Valley’s 320 and claim the state title.  Congratulations to the Falcons on a job well done. 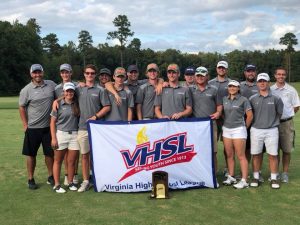