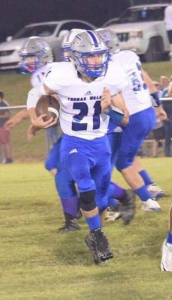 Ask anyone from the Ewing, VA & they’ll tell you that those are three of their favorite mainstays.

The latter of those three is a senior tailback for the Thomas Walker Pioneers. Last Friday, Thomas Walker defeated Hancock County 47-8 behind Lee’s eight carries for 173 yards and three touchdowns.

That effort was plenty enough to earn Dawson Lee the CoalfieldSports.com Offensive Player of the Week award for week seven.

“It means so much to me that I was even nominated for player of the week,” said Lee. “I couldn’t have done it without my amazing teammates.”

The effort that Lee put forth against Hancock County was nothing new if you’ve been following the Pioneers. The four year starter has been leading his team for quite awhile.

“Being a four year starter has just put me in the role as a leader,” said the senior tailback. “I learned from previous players and just listening to the coaches makes it easy to be able to lead. I’m so glad everyone believes in me to follow.”

The Pioneers always look to Lee for his leadership, but they had to lean heavily on the senior last week with many of the Pioneers banged up. Coach Nick Johnson didn’t let the injuries change the Pioneers’ gameplan.

“The game plan going into to Hancock was no different than any other week,” said Lee. “We were going to go over there and play the way we play and just come back with the win.”

In a game that the outcome was never in doubt, Lee averaged over 20 yards per carry & scored three times. When asked how he was able to have such an impressive performance Lee was quick to give the praise to his offensive line.

“My blockers were the ONLY reason I could score that game,” said the talented tailback. “That’s every game. I couldn’t do anything without them.”

The Pioneers have steadily improved throughout Lee’s four years. That has shown this season as the stands have been full for every game in Ewing as Thomas Walker is off to a 5-2 start. Lee & the Pioneers hope to build off that momentum going forward.

“The experience has been great,” said Lee. “I’ve had some great coaches along the way and they have just been a tremendous help with my game. My goal for this season is win a district championship and host a playoff game at home.”

Along with linebacker Jaron Warf,  Dawson Lee is the second  CoalfieldSports.com Player of the Week in 2018. While appreciative of the awards, Lee just like Warf, was quick to credit their coaches and the community of Ewing for their success.

“Our success has just came from the time these coaches have put in to our game plan and the team doing just what we need to do,” said Lee. “I don’t even have the words to tell you how great our community and support system is at Thomas Walker. These fans are just crazy on Friday nights. They do so much for us. They feed us before every game, cheer for us like no other, and just pick us up while we’re down. I would not want to play anywhere else.”