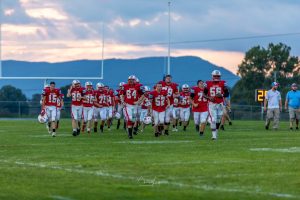 After giving up a 28-point lead and falling to James River last week, many wonder what the mindset is for the Spartan players and coaches. Giles dropped to 3-4 on the season and 1-2 in the Three Rivers District.

There was drama from the fans after the game as the coaches walked off the field, as well as arguments on social media about the coaching staff. Battling multiple injuries along with a small turnout of athletes, the Spartan coaches are limited on what players they can put where. This same staff lead Giles to seven straight successful seasons along with a state title and multiple district titles. As a fan of such a successful program, it is hard to watch your team struggle. Giles has maintained a reputation of having one of the best teams in southwest Virginia, but they are facing adversity with such a young, inexperienced team this season. With a lot of football left, the young Spartans can turn these struggles around as they prepare for the  Carroll County Cavaliers (2-4, 1-1).

Last season was the Cavs first year in the Three Rivers District. Giles defeated Carroll 61-15 in Pearisburg. This year the Spartans must travel to Tommy Thompson Field for the first time since 1989. Giles has won 11-straight with Carroll’s last victory over the Spartans being in 1979.

The Cavs won their first district game two weeks ago in overtime against Floyd. It was a defensive battle, but Carroll walked away with a 14-13 victory. Like Giles, the Cavaliers use a ground-and-pound style of offense. First year head coach Jack Turner has used this scheme throughout his high school coaching career.

Turner splits the carries between four different backs, who combine for 1,300 rushing yards. Leading in carries and yards for the Cavs is Cassell McMillan, who has 585 rushing yards on 125 carries. He also is one of the scoring leaders with five touchdowns. Dylan Rodrigue has rushed for 435 yards on 69 carries and also has five touchdowns on the season.

Giles has a host of backs as well that combine for 1,600 rushing yards. Leading rushers for the Spartans are tailbacks Logan Greenway and Chaston Ratcliffe. Greenway has rushed for 544 yards and Ratcliffe for 456 yards. Ratcliffe also has nearly 200 yards passing with two touchdowns. Fullbacks Hunter Williams and Dominic Collini combine for 400 yards rushing with Williams accounting for 300 of those yards as Collini did not play until week six. Wingback Chase Fleeman has 200 yards rushing through seven games.

This game will come down to the physicality at the line of scrimmage. Giles leads the series, 17-10.