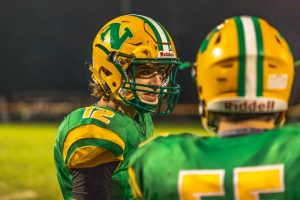 Last Friday was a huge night for the Green Wave. Not only did they defeat a tough Covington team with seconds remaining in their Pioneer District opener, they also broke a few records along the way. Quarterback Wyatt Freeman broke the single-game passing record, completing 17-of-26 passes for 308 yards. He also threw the game-winning touchdown with four seconds remaining in the game. This brings his passing totals to 53-of-87 for 906 yards.

Receiver Chase Blaker had a huge night as well. Blaker broke the single-game record for receiving yards. He had six receptions for 155 yards. He was also on the receiving end of the game winning touchdown. The duo of Freeman and Blaker have become a dangerous weapon for the Green Wave.

While setting records is always nice, Narrows (5-1, 1-0) must now focus their attention on the Eastern Montgomery Mustangs (2-4, 0-1). The Mustangs may not seem like a big threat, but the Wave know they cannot take any opponent lightly. The Mustangs have been shut out three times this season, while only scoring 52 total points and giving up 148 points in six games. With the high powered offense and stingy defense of Narrows, East Mont will face their toughest challenge thus far.

The leaders in the backfield for the Mustangs are the Owens twins, Dylan and Devin. Devin is the QB, completing 40 of 88 passes for 463 yards. Devin is the running back, carrying the ball 72 times for 335 yards. Eastern Montgomery is coached by Jordan Stewart. Stewart has a record of 9-37 through five seasons.

Narrows won last year’s contest 35-14 and they lead the series 18-12. East Mont’s last victory over the Wave was in 2014. This game is being played in Elliston.