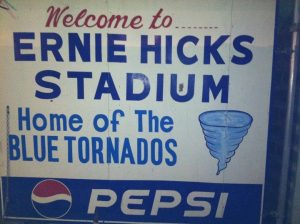 It hasn’t been easy for the Marion Scarlett Hurricane against the Richlands Blue Tornado. In a series that dates back to 1930, Richlands holds a decisive edge in the series.

How decisive? Richlands is 41-17-1 all time against its Smyth County neighbors. That’s good for a .703 winning percentage.

For all of those statistics, Marion is the reigning winner in the Battle of the Storms.

It used a late touchdown pass to send the home fans into a frenzy. Although that game seems like it was lightyears ago.

Since that meeting, the two squads have went their separate ways. Richlands (3-3) comes into the game looking to stay unbeaten in the Southwest District and continue a top four playoff seed push.

Marion (3-3) comes in having won an exciting contest against a game Blue Devils squad, one that erased a 30-point second half lead to nearly upset the Canes.

Richlands will look once again to breakout runner Trey Brown to run through a defense that has been susceptible to giving up long runs.

For Marion, the key to a victory lies on the arm of quarterback Tanner Tate. He was 12-of-17 for 197 yards and three touchdowns last week in the thriller against Gate City. Nick Reese also had 97 yards last week, and will look to provide support to Tate.

Richlands, playing on homecoming, will feature a surprise in the uniform department when they take E-Mats Field at Ernie Hicks Stadium.