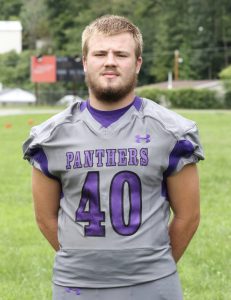 The next several weeks are very crucial for the Twin Valley Panthers in their chase for a spot in the Class 1, Region D playoffs.  Coming into this past Friday’s interstate matchup with the East Ridge Warriors, the Panthers were on the outside looking in.  48 minutes of football later, the Panthers achieved a critical win on homecoming night over there 2A opponents by a final score of 48-28.

It did not take long for the Panthers to get the action started as only three minuted into the contest, Brandon Lester took the pigskin in from five yards out.  The Warriors then got on the board just shy of six minutes later as Kane Taylor plunged into the endvzone from two yards out.  Not to be outdone, Xzavier Ward was able to recover his own fumble on the ensuing kickoff and race 77 yards around the right side for a touchdown with 3:04 left in the first quarter.  The score would hold up for the remainder of the first quarter with the Panthers on top 12-6.

Both offenses would cool off considerably in the second quarter, as the only score before halftime would come with 6:38 left on a Tylor Keen 26-yard pass to Isaac Hampton.  Keen also converted the two point conversion on the keeper.  At the half, the Panthers had a two score advantage at 20-6.

In the third quarter, Brandon Lester continued to show that he is the best back in the Black Diamond District not named Gabe Fiser.  Lester scored his second touchdown of the night with 7:49 left in the third quarter on a 15-yard run.  East Ridge answered with 27 seconds left in the quarter on a Cameron Hess 11-yard carry.  Taylor added the two point conversion to make the score 26-14 at the end of three quarters.

It would not take the Panthers long to take complete control of the contest in the final frame, as Lester raced 37 yards to the endzone only 50 seconds into the fourth.  With 11:10 remaining in the contest, the Panthers held a 32-14 advantage.  Only a little over two minutes later, Lester would continue to pad his stats and put the game out of reach.  Lester caught a quick out from Keen and raced 68 yards down the home sideline to paydirt.  Keen converted the two point try and with 8:57 remaining, the Panthers were on their way to victory up 40-14.  Kane Taylor would not go down without a fight as he would put the Warriors on the board again with with 5:45 left and draw the Panthers advantage to 40-20.  Keen would answer back only 12 seconds later with another quick out, this time to the visitors side of the field.  Xzavier Ward was the recipient on this occasion and raced 60 yards down the sideline.  Lester would add the two point try to make the score 48-20 in favor of the Panthers with 5:33 remaining.  The Warriors would finalize the scoring with only 40 seconds remaining, on a naked bootleg keeper from quarterback Trey Blackburn from 11 yards out.  Kane Taylor would run in the two point conversion to provide the final margin in favor of the Panthers, 48-28.

The offensive leaders for the Panthers was quarterback Tylor Keen who had 283 yards passing on 7-11 with three touchdowns complimented by 34 yards on the ground.  Brandon Lester rushed for 72 yards with three scores and also caught four passes for 112 yards with one score.  Xzavier Ward also had an outstanding night for the Panthers with 135 yards receiving on just two catches for one score.

The majority of the offense for the Warriors came from workhorse Kane Taylor as he had 243 yards on the ground on 41 carries.  Taylor also completed one pass for five yards.  Quarterback Trey Blackburn had one carry for 11 yards with one touchdown and was four of five passing for 50 yards.  Cameron Hess had 35 yards on the ground on four carries with one score.

Next week the East Ridge Warriors host Prestonsburg at home on top of the mountain high above Feds Creek and Elkhorn City.  Twin Valley will make the long trek to Ewing to take on Thomas Walker in a key matchup that will be critical for playoff positioning in Class 1, Region D.