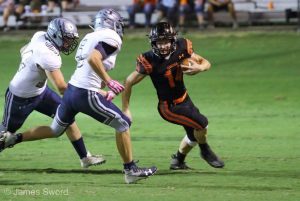 In one of the lowest scoring games in this longstanding rivalry, it’s only fitting that it was a defensive play that sealed the win for the Falcons.

Facing a 14-0 deficit late in the game, the Virginia High Bearcats’ offense was finally able to find the end zone on a touchdown strike from quarterback Jamie Lathrop to wide receiver Taurean Bizzell. The next series saw the Bearcats’ defense force a quick three and out. It was not to be though, as Abingdon defensive back River Carter made the play of the game with a victory sealing interception to cement the win over Virginia High.

The Falcons were opportunistic in making the Bearcats pay on two crucial mistakes.

Late in the first quarter, Bearcats return man Stevie Thomas fumbled a punt inside his own 40 yard line. The Abingdon offense went right to work and closed out the first quarter with 14-yard touchdown pass from Gabe Boothe to Tyler Thayer.

On Abingdon’s next offensive possession, the Falcons faced a third down and 14 from near midfield, when a pass from Boothe was knocked down by Bizzell. However, Bizzell was flagged for pass interference and the Falcons took advantage of the miscue. Just a few plays after the big penalty, senior William Seymore scored on a one-yard run to extend his team’s lead to 14.

The Bearcats offense was once again it’s own worst enemy. The struggles of the red zone offense, combined with the stout play of Abingdon’s defense, saw the Bearcats be shut out for the first three quarters of a game for the second consecutive week. In their last eight trips to the red zone, VHS has only scored twice.

The Bearcats seemed to have found a bright light in their recent struggles on offense. Six-foot, 215-pound bruiser Aaron Rose and freshman speedster Stevie Thomas are starting to develop into a dangerous 1-2 punch in the Bearcats’ backfield. The duo led the Bearcats offense with a combined 162 yards on 28 carries against a loaded box of talented Abingdon defenders.

Virginia High outgained the Abingdon offense 255-168, but every time the Falcons needed a stop, their defense stood tall, including stopping the Bearcats on fourth down, five different times. The Abingdon offense was led by running back Martin Lucas, who ran for 75 yards on 22 carries.

“I was pleased with how hard our guys played Friday and I thought our defense was much improved from a week ago,” said Virginia High head coach Michael Crist. “We are still lacking the necessary consistent execution, particularly in the redzone offensively.  We are our own worst enemy inside the 10.  However, we’ll keep working to resolve those issues.”

The Falcons (5-2) head into their bye week, before their district showdown against Ridgeview in two weeks.

Things for the Bearcats (3-3) do not get any easier, as they look to avoid eclipsing last year’s loss total against the very talented G-Men of Graham on Friday night.

Don’t forget Bearcat fans, you can listen to live broadcasts of every VHS football game this season from your favorite device at Spreaker.com/bearcatradio.